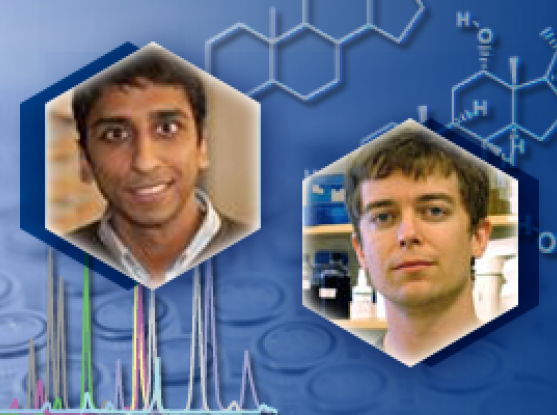 By Haley Bridger
When Mohit Jain joined the Broad Institute, he had no idea that the postdoc at the desk next to him would become a close collaborator and friend. Although Mo and Roland Nilsson sat only a few feet apart, they were working in different worlds. “I spoke the language of clinical biology, and Roland...

When Mohit Jain joined the Broad Institute, he had no idea that the postdoc at the desk next to him would become a close collaborator and friend. Although Mo and Roland Nilsson sat only a few feet apart, they were working in different worlds.

Roland, whose background is in computation and cell biology, worked on his postdoc in Vamsi Mootha’s laboratory at the Broad Institute from 2007 to 2010. Mo, a cellular physiologist and clinician by training, joined Vamsi’s lab in 2008. They worked on separate projects, but every morning over breakfast, they would try to explain what they were working on to each other. Slowly, the language barrier began to melt away and a common interest emerged.

“We were both interested in doing something in the space of metabolomics and measuring metabolism,” Roland remembers. “We both realized that we had complementary skills which fed off each other, and it seemed like a good match.”

This week, the results of that partnership can be found in the pages of Science (and in a Broad press release here). Roland and Mo are now the co-first authors of a paper that reveals new clues about cancer cell metabolism – an area of research neither intended to explore, but one that they were able to investigate together. The two worked closely with Vamsi Mootha and others in his laboratory as well as with researchers in the Broad’s Metabolite Profiling Platform to bring the project to fruition.

“At the Broad, the person sitting next to you may be nothing like you,” says Mo. “But if you put people with different backgrounds and different skills together, it’s immensely powerful.”

Mo and Roland were both involved in making hypotheses, designing follow up experiments, and developing a technique – known as CORE profiling – that’s at the heart of the new Science paper.

By looking across 60 cancer cell lines – cells from tumors that can be grown in the lab – the researchers found many patterns, the most striking of which was the way the cancer cells consumed glycine as they divided faster and faster. (Find out more here).

Roland, Mo, and their colleagues are interested in applying CORE profiling to lots of other cellular systems and looking at how cell metabolism regulates normal tissue physiology as well as drives diseases like diabetes and heart disease. Roland is now an assistant professor at the Karolinska Institute in Sweden, but he and Mo remain in close contact and continue to work together, whether they are in the same room or on opposite sides of the Atlantic.

Insights from a clinician-investigator
Two-way exchange