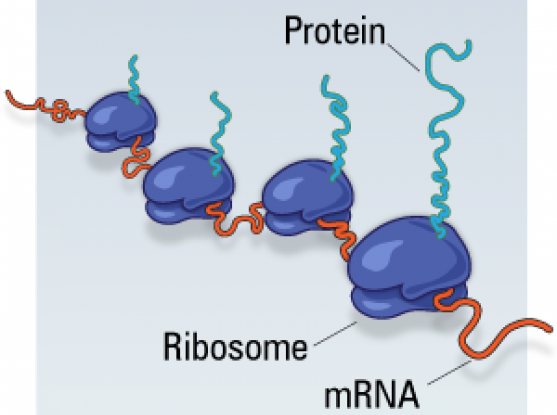 Ribosomes bind mRNA
By Haley Bridger
Individual nerve cells are obscured in the dense, forest-like geography of the brain. Unlike blood cells, for example, which are solitary travelers and can thus be easily captured and studied in isolation, the nerve cells (or neurons) of the brain conceal their identities among a thicket of similar...

Individual nerve cells are obscured in the dense, forest-like geography of the brain. Unlike blood cells, for example, which are solitary travelers and can thus be easily captured and studied in isolation, the nerve cells (or neurons) of the brain conceal their identities among a thicket of similar-looking, but functionally diverse neighbors. Developed by new Broad core member Myriam Heiman during her postdoctoral studies at The Rockefeller University, a methodology called TRAP is designed to catch single types of neurons and reveal what makes them different from their neighbors.

TRAP offers a way to isolate the messenger RNA (mRNA) of any genetically defined cell type efficiently and non-invasively. mRNAs are the molecular go-betweens bringing instructions from genes to ribosomes, the cell’s protein-making machinery. In the new TRAP methodology, a tag is attached to the ribosome and the trap is set: when the ribosome binds an mRNA to translate it into a protein, researchers can use biochemical techniques to purify the tagged ribosome and capture its bound mRNAs, revealing what genes are active and giving valuable clues about that cell’s identity. (TRAP stands for Translating Ribosomal Affinity Purification.)

Myriam is an assistant professor of neuroscience in the MIT Department of Brain and Cognitive Sciences, and a member of the Picower Institute for Learning and Memory. She wants to investigate how particular groups of neurons behave in mouse models of neurodegenerative diseases such as Parkinson’s and Huntington’s diseases. Myriam points out that in a number of neurodegenerative diseases, aggregation-prone, toxic proteins are expressed ubiquitously in the brain but, paradoxically, only a specific type of cells is affected in each disease.

Myriam hopes that by looking early in the disease process, her group will be able to spot the key, causative changes rather than secondary ones.

“We can now look at the most vulnerable cells in each case, and ask what distinguishes these cells from more resistant cells, and also what disease-causing changes are occurring very early on in the course of the disease, before symptoms develop,” she says. “We’re certainly not the first people to ask these questions. The difference is that we now have the ability to probe at the molecular level, comprehensively and with great cellular resolution.”

Myriam joined the Broad just a few months ago and is in the process of getting her lab up and running. She looks forward to the many collaborative opportunities that the Broad has to offer, noting that the TRAP approach can be applied to many non-neuronal cell types. “I’m delighted to be in this highly collaborative and interdisciplinary community,” Myriam says of her new home at the Broad.