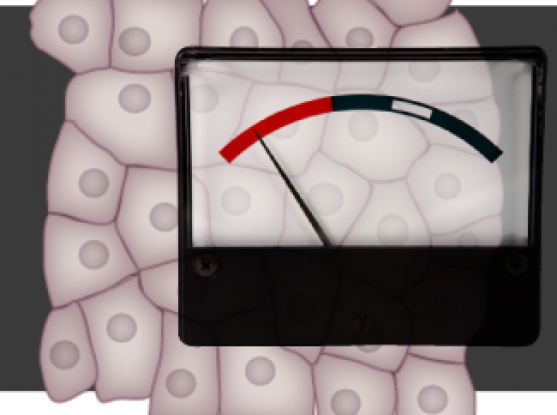 By Paul Goldsmith
To convert food into energy, our bodies rely on a complex network of molecular pathways known broadly as metabolism. Along the path from food to energy, intermediate molecules emerge that form the starting materials for the next step. Traditionally, these intermediates were viewed simply as building blocks — essential for the process, but otherwise inert.

To convert food into energy, our bodies rely on a complex network of molecular pathways known broadly as metabolism. Along the path from food to energy, intermediate molecules emerge that form the starting materials for the next step. Traditionally, these intermediates were viewed simply as building blocks — essential for the process, but otherwise inert.

But recently, a team of researchers including senior associate member Ramnik Xavier and Clary Clish, director of the Broad’s Metabolite Profiling Platform, revealed that one of these metabolic intermediates, known as succinate, plays a key role in alerting the body’s immune system — and may provide a crucial link between chronic inflammation, autoimmune disease, and cancer.

“Succinate is an important danger signal. It’s a good marker for cell stress,” said Xavier, a co-senior author of the study, recently published in Nature. The study linked high-levels of succinate to the production of an immune protein that triggers inflammation. Because succinate can be measured in blood, this finding may open the door to new diagnostics that measure immune responses.

The foundation for this discovery was laid by senior author Luke O’Neill, a professor at Trinity College in Dublin, who first observed that certain metabolic pathways in immune cells became highly active after the cells were stimulated with bacteria. The triggering of these pathways suggested the immune cells might be shifting their metabolism in a way previously thought to be exclusive to cancer cells.

One of the hallmarks of cancer cells is their ability to break down glucose at a vastly higher rate than normal cells. While most cells rely on oxygen to break down food, cancer cells can also ferment glucose — a less efficient process that does not require oxygen — to generate fuel. This metabolic shift allows them to adapt to the oxygen-deficient conditions inside tumors. The phenomenon, known as the Warburg effect, enables rapidly dividing tumor cells to generate the essential biological building blocks they need to grow. O’Neill also noted high levels of succinate in these same immune cells, and wondered what role this intermediate product might be in the metabolic shift.

Xavier, who specializes in the study of autoimmune disease, was intrigued. He offered to establish a collaborative effort with scientists at the Broad to help identify the biological circuit that might enable this metabolic shift and cause the accumulation of succinate.

Working with Xavier, Clish and the members of the Broad’s Metabolite Profiling Platform discovered that the high levels of succinate were a result of the shift and lead to an increase in the production of interleukin 1-beta, an immune protein linked to pain, inflammation, and autoimmune disease.

“Multiple studies have shown that chronic inflammation is a precursor event for several epithelial cancers,” says Xavier. “This is evidence that some of the same pathways that accelerate the progression of tumors are also operational in innate immunity.” What’s more, Xavier believes that succinate may not be the only the immune signal that plays a role in disease. Together, Xavier, Clish, and O’Neill are expanding their research to include other immune signals.