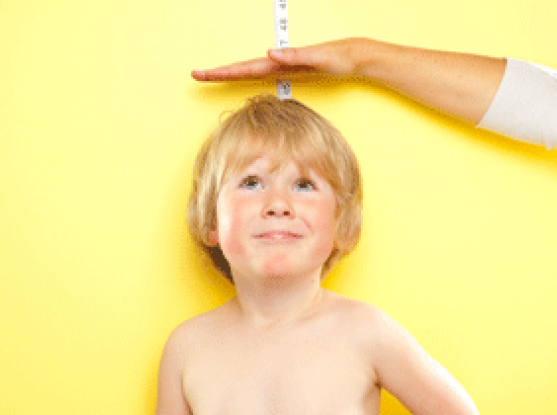 By Leah Eisenstadt
Last week, Broad researchers and others in the GIANT (Genetic Investigation of Anthropometric Traits) Consortium published work revealing 180 genomic regions influencing height , the most yet identified for a single trait or disease. It may come as no surprise that stature is leading the pack when...

Last week, Broad researchers and others in the GIANT (Genetic Investigation of Anthropometric Traits) Consortium published work revealing 180 genomic regions influencing height, the most yet identified for a single trait or disease. It may come as no surprise that stature is leading the pack when it comes to traits yielding their genetic secrets. Height is one of the easiest traits to measure, and studies on other traits and diseases often record subjects’ height, providing ample data for scientists.

Over a century ago — long before Watson and Crick, and even before scientists knew that DNA was the stuff of heredity — scientists recognized that height is a continuous and “polygenic” trait, meaning it is influenced by many heritable elements, not one or two. With the advent of genome-scanning technologies and large-scale maps of common genetic variation, scientists have been able to identify some of the genes and genetic elements contributing to height’s heritability, even pointing to certain biological pathways. Work at the Broad Institute and elsewhere may help scientists understand the biology underlying human growth. It also demonstrates what may be in store for other complex, polygenic traits and diseases currently being studied with similar genome-mining techniques.

Here are some other interesting facts about height:

Height is an indicator of nutrition. The World Health Organization uses height to monitor malnutrition in developing countries. “Stunting” occurs when children are too short for their age group, compared to growth standards. Children may become stunted from inadequate food, a vitamin- and mineral-deficient diet, or disease.

Height is a proxy for economic variables. Through painstaking archival research, experts in the field of “anthropometric history” —established in the 1970s — observe trends in height within populations, between populations, and over time. Among their discoveries is the fact that American soldiers during the Revolutionary War were two inches taller than British soldiers, likely due to nutritional benefits of the New World. Countless other studies showed that societal factors can reveal the genetic influences on height. By removing environmental factors like inadequate diet or healthcare, people are more likely to reach their potential height due to genetic factors.

The “Gentle Giant.” According to the Guinness Book of World Records, the tallest human on record was Robert Pershing Wadlow (1918-1940), who grew to a height of 8’ 11.1”. At age 5, Wadlow reached 5’ 6 ½” and wore clothes that would fit a 17-year-old boy. Wadlow’s extraordinary stature was due to a high level of growth hormone from an enlarged pituitary gland, known as gigantism. Wadlow had a quiet demeanor that led to his nickname, “Gentle Giant.” [Note: Large-scale genetic scanning studies search for common variants that nudge height in one direction or another. They are not necessarily looking for the genetic mutations responsible for conditions of extreme short or tall stature.]

Too much or too little growth hormone can cause disease. An excess of growth hormone in children, due to an enlarged or overactive pituitary gland or a tumor on the gland, can cause gigantism like Wadlow’s. If there is too much growth hormone in the body in adults — after the growth plates at the end of bones have closed — it can lead to a condition called acromegaly, in which the hands, feet, and face are larger than normal.

Alton Museum of History and Art.

Anthropometric History, What Is It?

Palladium catalyst scientists awarded Nobel in chemistry
This too, too solid flesh...