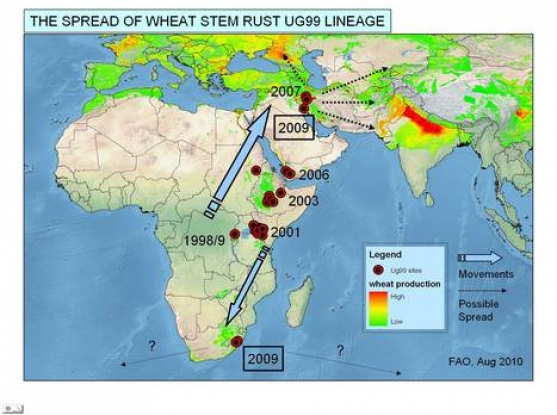 By Alice McCarthy
Les Szabo has been working with wheat stem rust fungi for 23 years. But that’s just a small fraction of the more than 1,700-year history in which a variety of cultures have done battle with the fungi that attack agricultural cereal plants and grasses, decimating these important food sources with...

Les Szabo has been working with wheat stem rust fungi for 23 years. But that’s just a small fraction of the more than 1,700-year history in which a variety of cultures have done battle with the fungi that attack agricultural cereal plants and grasses, decimating these important food sources with impunity.

Earlier this week we told you about the work that Christina Cuomo, Group Leader, Fungal Genome Sequencing and Analysis at the Broad Institute, published in partnership with Szabo, a researcher at the University of Minnesota and the Cereal Disease Laboratory of the U.S Department of Agriculture, and others detailing important genetic information about the genome of a particular wheat rust fungus that specifically targets the wheat stem – Puccinia graminis f. sp. tritici. The team reported that the fungus appears to have an unusually large genome containing a variety of previously unknown effector genes used to escape the natural defenses of its wheat host. (Read the news story here.)

This is an extraordinary accomplishment when one considers that many of the wheat lines in use today were specifically bred for stem rust resistance. In the 1950s, Norman Borlaug, a University of Minnesota agronomist, travelled to Mexico where he curated high-yield, disease-resistant wheat varieties. These wheat lines were carefully crossbred to contain multiple stem rust resistant genes. “Over time, however, the efficacy of the wheat’s stem rust resistance genes has eroded,” Szabo explained to me, such that fungi have overcome those genes with the sole exception of the SR31 gene. Of course, that didn’t last forever either.

All went well for many years until a particularly virulent strain of P. graminis f. sp. tritici surfaced in Uganda in 1999 that overcame SR31 resistance. That strain, identified as Ug99, is the first isolate ever found to be able to overcome SR31 and it also can overcome many other resistance genes. “Ug99 is unusually virulent in a way that we have never seen before,” adds Szabo. When his colleague, Yue Jin, compared all the different prominent Ug99-related fungi in North America characterized over the last 80 years, he found that Ug99 is still more virulent than all of those fungi combined. (To learn more about the science of Ug99, its current geographic trajectory, and the global effort to minimize its threat, visit the Borlaug Global Rust Initiative website.)

Cuomo and Szabo’s work on the P. graminis f. sp. tritici genome provides the genetic groundwork to develop the tools to identify the unique fungal genes that correspond to the various SR genes. “We are now working with Ug99 isolates that carry virulence against SR31 and those that are avirulent,” Szabo explains. “We then hope to be able to use genetic variation data to track down this gene that corresponds to SR31.”

In related work, Szabo’s laboratory is developing diagnostic tools for Ug99 and related members of fungi group. He says, “We want to develop diagnostic assays so that within 24/48 hours we know whether it is Ug99-related or not.”

As for the 1,700-year battle with stem rust, the Romans were so vexed by it that they named a rust god, Robigus, whom they honored in sacrificial ceremonies in the hope that wheat stores would be spared. We just passed the Robigalia holiday on April 25 but we don’t think it’s too late to lift a wheat beer in acknowledgment of Robigus – or better yet, Cuomo, Szabo and their colleagues.

Marfan syndrome: from gene to drug
It’s a TRAP