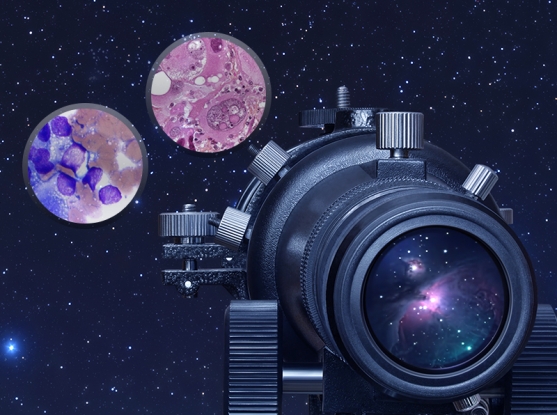 By Lisa Girard
Synergy between two large cancer datasets may help identify a targetable weakness across many cancers When making a simple telescope, relative adjustments between two lenses can bring previously blurry objects sharply into focus. Peering through two such “lenses” recently led to a discovery that may help identify which patients could most benefit from taking aim at a potentially widespread cancer therapeutic target.

When making a simple telescope, relative adjustments between two lenses can bring previously blurry objects sharply into focus. Peering through two such “lenses” recently led to a discovery that may help identify which patients could most benefit from taking aim at a potentially widespread cancer therapeutic target.

The lenses in this case -- two large cancer datasets created at the Broad Institute called Project Achilles and The Cancer Cell Line Encyclopedia (CCLE) -- brought into focus a connection, uncovered by Broad researchers, between the deletion of a gene called MTAP in certain cancers, and a gene called PRMT5, that appears to be a potential “vulnerability” and therapeutic target. Vulnerabilities, the “Achilles’ heels” of cancers, are features thought to be unique to cancer cells, not found in normal cells, that can be pinpointed by therapies with the aim of sparing normal cells during cancer treatment. What made this connection particularly exciting is that MTAP deletions are common across a number of different types of cancers including glioblastomas, bladder, pancreatic, melanoma, and non-small cell lung cancer making the impact of this finding potentially broadly applicable.

Reported in this week’s Science, Broad institute member and associate professor of medicine in the Department of Medical Oncology at the Dana-Farber Cancer Institute and Harvard Medical School Levi Garraway and colleagues analyzed and tested data from across both CCLE and Project Achilles, serendipitously uncovering a previously unknown connection between a gene called methylthioadenosine phosphorylase (MTAP), which encodes an enzyme that is part of an amino acid salvage pathway helping provide protein building blocks in the cell, and a gene called protein arginine methyltransferase 5 (PRMT5), which encodes a factor that, as part of a “methylosome complex,” chemically modifies particular proteins as a way to signal changes in gene expression. The MTAP gene lies in close proximity to a common tumor suppressor gene called CDKN2A, and researchers had known that MTAP was also commonly deleted when CDKN2A was deleted. Previous studies had shown that MTAP is deleted in 40% of glioblastomas, 25% of melanomas, bladder, and pancreatic cancers, and 15% of non-small cell lung cancers.

By combining data from Project Achilles and CCLE, Gregory Kryukov, co-first author and former group leader in Garraway’s lab, and computational colleagues discovered that, in cancer cell lines with a deletion in the MTAP gene, additionally removing the function of two particular genes -- PRMT5 and a gene called WDR77 -- caused the cells to die, suggesting they were more sensitive to inhibition of these factors than normal cells. Interestingly, the proteins encoded by these two genes have been previously known to associate with each other in the methylosome complex.

Once these data were identified, the results were validated in the lab by co-first authors Rick Wilson, a post-doc in Garraway’s lab and instructor of medicine with the Department of Medical Oncology at Dana-Farber Cancer Institute, and Jason Ruth, also a post-doc in Garraway’s lab, to ensure that the experimental results corroborated those found computationally -- and they did.

Based on their findings, the scientists postulate that when MTAP is deleted, levels of the metabolite MTA (what the MTAP enzyme acts on) build up. Since it was already known that MTA can inhibit the activity of PRMT family members, and the researchers found that MTA specifically inhibited PRMT5 activity more than other PRMT5 family members, they surmised that tumor cells with elevated MTA would be more susceptible to further inhibition of PRMT5, making it a useful therapeutic strategy. This work uncovered for the first time the link between MTAP and PRMT5, and that loss of MTAP might make cancer cells more sensitive to PRMT5 inhibition. Significantly, it not only connects the two factors but elucidates the biology between them, which could inform multiple tactics to inhibit PRMT5.

“The association between MTAP deletion and sensitivity to depletion of PRMT5 could only be appreciated by integrating data from Project Achilles and the CCLE. Project Achilles revealed that a subset of cancer cell lines are sensitive to depletion of PRMT5, and the CCLE data indicated that MTAP deletion is the major genomic feature shared by those cancer cell lines,” said Wilson.

“Another key factor that enabled this discovery was the truly collaborative nature of the work,” noted Kryukov. “Working on these large-scale data sets, we were able to pull in other resources as needed. For example we had have no idea we’d need expertise in metabolites, but we did, and the expertise was available to support those efforts in the form of Clary Clish and the Broad Metabolomics Platform. These studies would not have been possible without many different individuals with many different expertise all working together”.