Getting the cover story 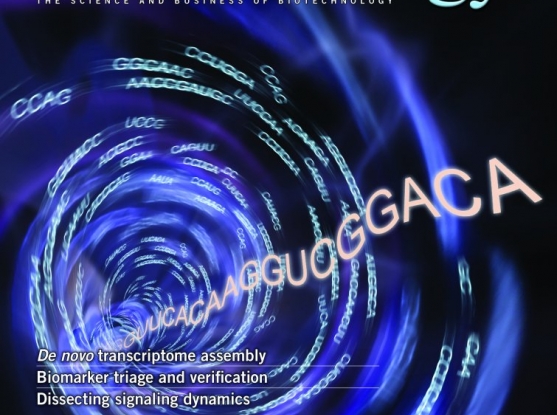 By Leah Eisenstadt
Back in May, we told you on the blog about Trinity, a suite of tools that assembles transcripts, or bits of RNA that have been copied from a cell’s genome, into a “transcriptome,” even without a reference genome handy. (As Haley explained in her post, if the genome is the cell’s “parts list,” then...

Back in May, we told you on the blog about Trinity, a suite of tools that assembles transcripts, or bits of RNA that have been copied from a cell’s genome, into a “transcriptome,” even without a reference genome handy. (As Haley explained in her post, if the genome is the cell’s “parts list,” then the transcriptome shows what parts are being made and by how much, revealing much about the state of a cell.) Trinity was built by Broad researchers Brian Haas, Moran Yassour, and Manfred Grabherr, along with help from Kerstin Lindblad-Toh, Aviv Regev, and Nir Friedman, among others.

The work was published online in Nature Biotechnology in May, and this week it graces the cover of the journal with a striking image: a vortex of short RNA reads churning out a single chain of RNA bases representing the transcriptome.

The creation of this dramatic illustration is a story of collaboration among scientists and artists that is repeated often for the Broad’s many cover-worthy publications. In this case, when the researchers’ paper was accepted for publication by Nature Biotechnology, the journal’s editor suggested they submit a cover image to accompany their paper. The research team recruited our in-house scientific illustrator, Sigrid Knemeyer, to develop a concept for the cover art.

“A cover image should get the core story of the paper across with appealing and captivating graphics,” Sigrid says. “While a paper is highly complex and includes many aspects of the research being conducted, it can be a challenge to zoom into one key area for the cover.”

Nir Friedman, a co-author of the new study and a Broad associated researcher in Aviv’s lab who is based at the Hebrew University of Jerusalem in Israel, gives us a look behind-the-scenes of this process on his blog. After discussing the research with the scientists, Sigrid developed four initial concepts to illustrate the assembly of a transcriptome, including a Matrix-inspired rainfall of As, Gs, Cs, and Us, stacks of paper covered in RNA bases, and a vortex of RNA sequences. The team liked the paper stack idea and the vortex idea, and combined them into an image of swirling short strips of paper. After some fine-tuning by Sigrid, the team sent the concept to the journal, where graphic editors recreated the image in a different style.

She explains some of the challenges of her work: “Each journal has their own style and preference in the type of images they use and it’s always a challenge to match that style as close as possible. This can be tricky since we rarely have any direct contact to the art director and the editors aren’t always helpful in giving us any hints what would have a good chance of being chosen. Sometimes, like in the case of the Nature Biotechnology cover, the journal takes the liberty to alter the image.”

Sigrid says she thrives in learning new things and enjoys engaging with scientists, who dive deep into their research for many years. “My work comes in at the final moment to illuminate the results,” she says.

As Nir says on his blog, “This was an interesting process. Sigrid was great in making this happen, and deserves a lot of credit.”

For a look at some other journal covers through the years, visit Dave Lo’s gallery of cover art from scientific magazines and journals.

Engineering the liver
Journey of a cancer sample, part III