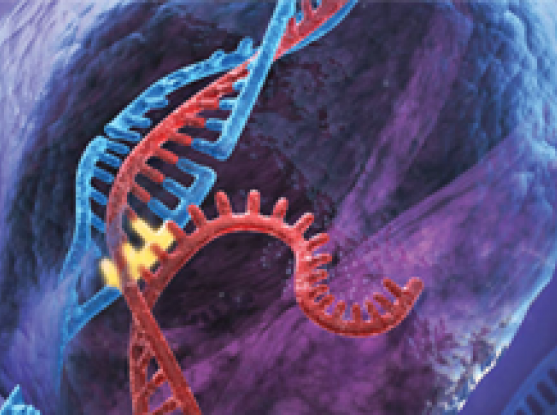 By Haley Bridger
Many of the most remarkable tools in genome engineering have humble beginnings. This week, Broad core member Feng Zhang and his colleagues from MIT and Rockefeller University report on one of the newest additions to the growing list of genome editing technologies. Known as CRISPR (clustered regularly interspaced short palindromic repeats) systems,

Many of the most remarkable tools in genome engineering have humble beginnings. This week, Broad core member Feng Zhang and his colleagues from MIT and Rockefeller University report on one of the newest additions to the growing list of genome editing technologies. Known as CRISPR (clustered regularly interspaced short palindromic repeats) systems,

these tools allow researchers to snip DNA at precise locations – and at several sites at once, if desired – so that researchers can test the effects of mutations inside a cell. Like other tools currently in use, the CRISPR system has been adapted in the lab but has its origins in nature, where bacteria have been using it as an archive of genetic memory to defend themselves from viral invaders.

Most of the time when we think about immunity, we envision how the human body staves off infection and protects itself from pathogens. But bacteria have immune systems too. Over the millennia, bacteria and their fellow single-celled but distant cousins the archaea have developed a multitude of defense mechanisms against intruders. Just as bacteria can invade our bodies, they in turn can be invaded by viruses known as bacteriophages (phages for short). To protect themselves, many bacterial species have developed their equivalent of vaccines – they chop up and then incorporate short fragments of foreign invaders’ genetic code and store them in CRISPR elements, keeping a genetic record of previous infection. These records are packaged and sent out inside the cell to help the organism detect and destroy phages, should they be exposed to them again.

CRISPRs were first discovered by a group of researchers in Japan in 1987. The scientists found what they termed an “unusual structure” in the genome of E. coli, consisting of a series of repeated stretches, interrupted by unique “spacer” sequences. The role of these sequences was at first a mystery, but over the years, scientists have come to understand that the spacer sequences corresponded with phages that had previously infected the bacterial cells.

Today, scientists such as Zhang and his colleagues have co-opted CRISPRs, using them as a tool to probe biology and better understand disease. Like TAL-effectors (more about those tools here) and other genome editing tools, CRISPRs can be designed in the lab and customized to induce cuts at precise location in the genome. But unlike other tools, CRISPRs are constructed from RNA – a cheaper and easier starting material – and can make nicks simultaneously at more than one genomic location, allowing researchers to look at the effects of combinations of mutations.

“All of the mutations that people identify through genome-wide association studies are based on clusters of mutations. You can’t test that by introducing just one mutation at a time into a cell,” says Zhang. “You have to test all of them together because they may be interacting with each other.”

Zhang and his colleagues are pursuing ways to create and test many precise mutations at once using CRISPR.

“Right now, when people do genome editing, it’s usually one student or postdoc working on one or two mutations at a time. It would be nice to scale that up,” he says. “This is one of the first steps. There’s still a lot of work we have to do to scale up the downstream steps, but we’ll get there.”

Zhang credits the progress the group has been able to make so far to a multidisciplinary team, including Luciano Marraffini’s lab at Rockefeller University, Phil Sharp’s lab at MIT, collaborators at Columbia, and researchers in the Zhang lab, particularly co-first authors Le Cong and Ann Ran. Ran, a graduate student at Harvard, explains that it’s a particularly exciting time to be developing new genome editing technologies, given how rapidly researchers are uncovering genetic variations implicated in disease.

“I think the field of genome engineering is at a particularly fortuitous point right now because there's so much sequencing information that's been generated in recent years,” Ran says. “We also have a greater understanding of how multiple genes and pathways interact in complex diseases. We have all these data to build disease models on, and now the tools are catching up to enable us to engineer the genome in a precise and multiplexed way.”