A fresh approach to data visualization 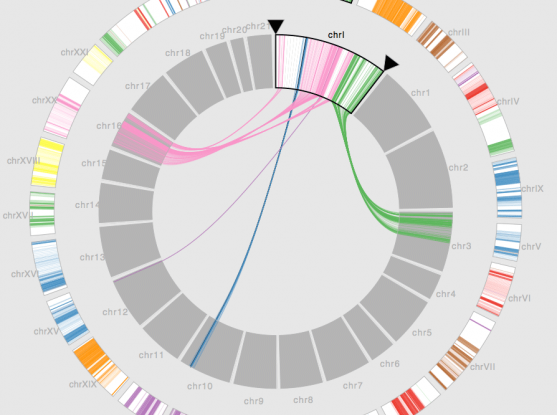 MizBee's genome view.
By Leah Eisenstadt
After completing graduate school, computational scientist Miriah Meyer noticed a disappointing trend in data visualization. “Our field is usually about generalities,” she says. “We create algorithms or systems that are very general for some broad class of problems or types of data.” But Miriah saw...

After completing graduate school, computational scientist Miriah Meyer noticed a disappointing trend in data visualization. “Our field is usually about generalities,” she says. “We create algorithms or systems that are very general for some broad class of problems or types of data.” But Miriah saw that these solutions, especially those for the analysis of biological data, often didn’t help answer the specific questions of scientists using them.

She soon began a postdoctoral research fellowship at Harvard University, while working as a visiting scientist at the Broad Institute. Discussing her field’s shortcomings with collaborators, including Broad creative director Bang Wong, Miriah crafted a new approach to visualizing biological data that she hoped would be more valuable to researchers. “We said, let’s design tools that we know are effective and really will make an impact on the work of individual scientists,” Miriah says.

So she began designing custom solutions to the very focused biological problems of her scientific colleagues at the Broad and Harvard. One of these solutions – MizBee, developed with Broad researchers Li-Jun Ma and Manfred Grabherr – creates a visual interface that allows the user to explore the similarity between two genomes at various scales. Users can start at the genome view, showing all chromosomes in a genome, and drill down to the level of sub-chromosomal blocks of similar sequence. In the genome-level view shown above, one genome – the “source” – is displayed on the outer ring. A copy of chromosome I from this genome is shown in the inner ring, alongside the second, greyed-out “destination” genome. Blocks in the destination genome are linked to similar sequences in the comparison chromosome with colored, curved lines.

MizBee can be used to compare the genomes of different organisms, as Manfred did when comparing the highly adaptive stickleback fish to the well-studied pufferfish. But it can also be used to look for duplicated segments within one organism’s genome, by making the “source” and “destination” genomes the same. Li-Jun was searching for evidence of genomic duplication in the potentially life-threatening rhizopus fungus, and her data and feedback, along with Manfred’s, helped Miriah and her team refine the MizBee software.

Another tool called Pathline, developed with Bang along with Mark Styczynski and Dawn Thompson from Broad core member Aviv Regev’s lab, integrates data on the changes in expression of genes from 14 different species of yeast, in the context of molecular pathways, into one single tool. 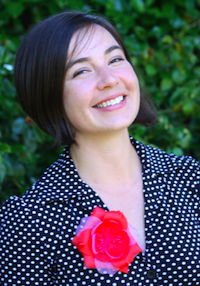 It turns out that these custom solutions have a life beyond their initial purpose. “Over the last couple of years, there are things that have become generalizable from these sorts of projects,” Miriah says. “You can come up with a new visual representation that is actually useful in a broader class of problems than just the one you designed for.”

Miriah’s “bottom-up” approach to data visualization recently garnered attention from Technology Review, which included her in its 2011 TR35 – an annual list of 35 innovators under 35 – for “developing programs that make it easier for scientists to explore the data they’re generating.”

She describes her approach: “Let’s go after specific problems and understand them and come up with novel solutions. From there, build them and see where else we can apply them, rather than the other way around.”

Miriah explains that her experiences and collaborations at the Broad helped form this new research philosophy. “All the scientists I worked with were so quick and eager to let me be part of their working team,” she adds. “Bang’s ideas as a designer have influenced my work so much.”

This fall, Miriah joins the faculty of the University of Utah as an assistant professor in the School of Computing, where she will teach visualization courses at the undergraduate and graduate levels. She also plans to work towards building a smart visualization toolkit for biologists that integrates ideas from her individual projects into a system that allows biologists to build, on the fly, interactive tools with a variety of visual representations. “My long term path is ultimately figuring out systems that will allow people to explore visual representation and design in the context of data without having to program,” she says.

While being named on the 2011 TR35 is an honor, it’s also a source of encouragement for Miriah as she begins her career as an academic faculty member and researcher. “It feels like a real sort of validation of this approach I’ve been taking to visualization research, so it’s nice.”

Word of the day: Fusion gene
Stifling a statin side effect