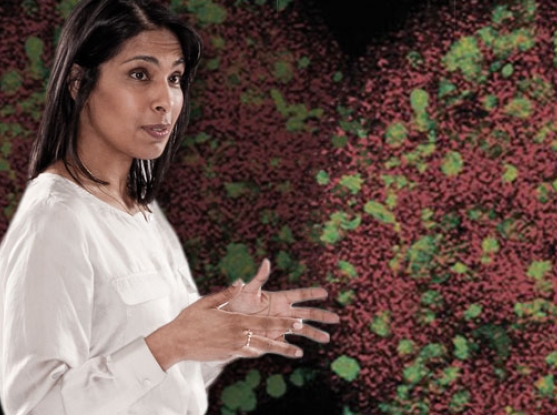 By Leah Eisenstadt
For Sangeeta Bhatia, now is an exciting time to be a biomedical engineer. Her research on liver regeneration and nanomedicine spans the diverse and quickly advancing fields of nanotechnology, regenerative medicine, infectious disease, cancer, and tissue engineering, among others. Bhatia keeps pace...

For Sangeeta Bhatia, now is an exciting time to be a biomedical engineer. Her research on liver regeneration and nanomedicine spans the diverse and quickly advancing fields of nanotechnology, regenerative medicine, infectious disease, cancer, and tissue engineering, among others.

Bhatia keeps pace in the fast-moving world of biomedical research through hard work, innovation, and creative problem-solving. As the John J. and Dorothy Wilson Professor of Health Sciences and Technology & Electrical Engineering and Computer Science at MIT, and a member of the David H. Koch Institute for Integrative Cancer Research at MIT, she says her successes are only possible with the help of a “fantastic team” of technicians, managers, scientists, students, and post-doctoral researchers in MIT’s Laboratory for Multiscale Regenerative Technologies, which she heads.

As a senior associate member of the Broad, Bhatia collaborates with scientists in the institute’s Cancer Program, RNAi Platform, Imaging Platform, and Infectious Disease Program, conducting research at the intersection of genomics and nanomedicine. Bhatia’s lab has pioneered methods to coax finicky liver cells – known as hepatocytes – to grow in culture. In collaboration with Broad researchers, her liver cell culture platform has been used to study drug interactions, drug toxicity, and liver infections. Bhatia and her colleagues are now searching for clues to why hepatocytes need connective tissue cells known as fibroblasts to keep them happy in the dish, with the ambitious goal of eventually engineering a functioning artificial liver as an alternative to transplantation.

Recently, Bhatia teamed up with a group of Broad researchers led by Infectious Disease Program co-director Dyann Wirth to study the hibernating form of malaria, which hides out in the liver. The scientists successfully infected hepatocytes with the parasite, shedding light on the secrets of this latent infection and how it might be tackled therapeutically.

Bhatia recently sat down with us to answer five questions about her work.

Q1. You build nanoparticles that could one day be used to diagnose and treat cancer. Why are nanomaterials – and the nanoscale – so relevant to biomedical research?

SB: As an engineer, I’ve been trained in miniaturization. When I became trained in medicine and started thinking about human disease, that was my toolset and what I wanted to bring to the picture. Initially what that meant was microfabrication, using tools from the semiconductor industry for making microchips. Over time the field has evolved, and we’ve evolved our thinking, as well. So we’ve accumulated other tools, and they include things like 3D printing, and then also nanoparticles and nanotechnology, because technology has been getting smaller and smaller – microfabrication is now the technology of the 70s.

Now we have in our arsenal a suite of tools that are between ten nanometers and ten microns. And for us, this range is a great sweet spot, because it spans everything from single proteins to single cells. That’s kind of where the action is in a lot of human diseases.

Q2. Your work is highly collaborative, spanning disciplines and institutions. What is your strategy for incorporating such diversity in your research?

SB: I was trained in the Harvard-MIT Health Sciences and Technology program, in which I studied medicine at Harvard and engineering at MIT, so I was sort of raised with a foot in both worlds. I think I’m, by nature, very problem-oriented. I’m an engineer and we build things and solve problems, and I’m a physician and we solve medical problems. In both of those scenarios, you have imperfect information but you still have to act. You might not have a full mathematical model of the physics or a full understanding of what’s driving the disease process, but you still have to make progress and make decisions.

Human disease doesn’t know if you came from chemistry or physics or engineering. Mother Nature is agnostic to the discipline. We’ll bring in whatever we need to solve the problem. It is a really fast-moving world right now, so our strategy in dealing with interdisciplinary work is to always look outside ourselves and think, “Who’s the world leader in that?,” and go and collaborate with them. I think otherwise it’s really hard to stay at the forefront of so many fields at once, because they’re all moving a mile a minute.

Q3. Why is the hibernating form of malaria so important, and how has your culture system been instrumental in studying it in the lab? What would you like to see happen next in this field of research?

SB: We’ve been trying to grow this elusive form of malaria that no one has really ever seen in vitro. The hibernating form of malaria is a barrier to eradication, because if there are dormant reservoirs in the population, then even if you seem to eradicate it, it’ll come back.

In this recent paper, we’ve been able to infect our liver cell culture system with the dormant form of malaria. We’d like to know that we have it for sure by showing that it was dormant, waking it up, and showing that we can find drugs to kill it. We should be able to screen [at the Broad] for things to wake it up, even existing anti-malarials that work on the other forms of malaria. We just want to see which ones kill this hibernating form. That would be a direct path to global health, because these are already medicines that are in the late stage of the pipeline and we’re just helping pick the ones that can work.

Q4. Your scientific solutions are so innovative. How do you nurture creative thinking in your laboratory?

SB: Trying to be bold is part of our lab’s culture. Something I really try to cultivate is to not do the next obvious experiment, but to do the transformative experiment — to have the idea that no one else is working on, and then run after it. The way that we do that is to rely on great people. We’re super picky about who we bring into the group, and we value heavily not just that they’re accomplished, but that they’re innovative thinkers in whatever they did before and that they bring really diverse skills. If you look at the PhDs in our group, we have chemists, biologists, physicians, engineers, and now we even have a synthetic biologist, a roboticist, and a clinical dermatologist.

Borrowing a principle from the engineering world, I tell my lab members they should spend 20% of their time tinkering. And tinkering can be whatever it means to you — one trainee is even working with an artist-in-residence [here at the Koch Institute]. They call them submarine projects in the lab, because they feel like they’re hiding them from me, but it’s completely sanctioned. Do whatever you want and tell me about it when it’s exciting.

Q5. Your long-term goal is to build an implantable artificial liver. What’s the biggest obstacle to achieving that goal?

SB: For us, I think the real remaining bottleneck [to engineering an implantable liver] is getting the hepatocytes to survive alone, without the fibroblasts. Because I think that’s the last thing left. We can grow them now, we can implant them, and we think we can scale that up. If the hepatocytes didn’t need any neighbors, we’d be done. It’s not a trivial task, but then it would just be execution. We are pretty close to that goal. Through screening work, we’ve identified some factors that look really promising. We’re collaborating with David Thomas and Jesse Boehm at the Broad to do a gain-of-function screen [using the ORF library] to see if we can add those factors back to hepatocytes and get them to survive alone. It’s not going to be solved tomorrow, but there’s a path.