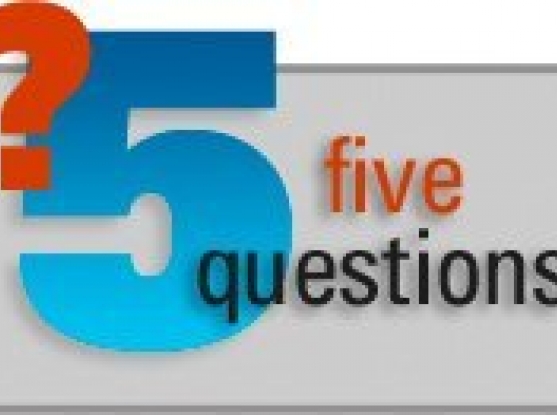 By Leah Eisenstadt
As Creative Director at the Broad, Bang Wong has helped shape the DNAtrium’s varied exhibits, created figures and cover art for many scientific papers, and collaborated with scientists on the best way to display complex data . He recently launched a monthly column called Points of View in Nature...

As Creative Director at the Broad, Bang Wong has helped shape the DNAtrium’s varied exhibits, created figures and cover art for many scientific papers, and collaborated with scientists on the best way to display complex data.

He recently launched a monthly column called Points of View in Nature Methods. Each edition will feature both conceptual and practical discussions of a particular topic on the visual presentation of scientific data, such as the use of color or design of data figures. His column was the most downloaded article and the fifth most emailed on the journal’s site over the past month.

Bang was also recently profiled in Nature Medicine as one of leading innovators at the interface of art and medicine.

Here we attempt to capture Bang’s unique point of view with Five Questions.

Q1. It seems that your column is written not just for illustrators, but for scientists as well. What do you hope to accomplish with the new column?

Bang: My hope is to draw connections between art and design to the visual communication of science. When you go into a bookstore, there’s a section on art, and another on design, but there are few books on creating scientific figures and graphics. One exception is Edward Tufte’s book that illustrates how compelling stories can be told through well-designed statistical charts or how poorly conceived charts can mislead. The content in the column is along the lines of the information in this classic text.

Q2. How has working at the Broad shaped your approach to scientific illustration?

Bang: It has helped me learn and develop a new visual vocabulary for showing the unseen. In medical illustration — the field I originally trained in — it’s about showing what can’t be seen. Here, we tend to show concepts and quantitative data that have no physical forms. It’s like illustrating the “strategy” for playing chess rather than drawing the chess pieces.

Bang: LOGO representation of consensus sequences. It’s the color and distortion of the A’s, T’s, C’s, and G’s that bothers me. I know some scientists find the representation useful. I think there must be another visual encoding out there that’s just as effective, but treats the letter form with dignity!

I am also skeptical of fancy colorful displays of data. We’re easily wowed by them. At first glance, we may be under the impression that we’re absorbing a lot of information but when we actually go to decode the visualization, it can be difficult or near impossible.

Q4. What is the best example of visual problem solving you’ve seen lately?

Bang: I can’t think of a particular example at the moment but I like the work of Fernanda Viégas and Martin Wattenberg. They have been able to provide really interesting insights to social issues by simply visualizing repetition. In a recent project they looked at “Google suggest” to see what’s on the collective minds of the all the people who search the web using Google.

In general, I like infographics like those in the New York Times (see here and here for examples) as a way to visually describe a problem or solution. These displays of information engage the reader by letting them come up with their own interpretation or at least lay bare the data behind the interpretation being reported. 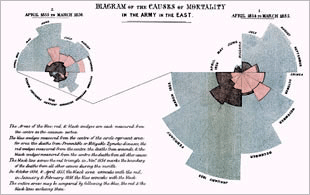 Florence Nightingale's graph of causes of death in the
Crimean War, 1854-56. Source: WikiMedia.

A classic example is Florence Nightingale's coxcomb graph displaying causes of death in the Crimean War from 1854-1856. She was an expert in medical statistics and knew that people can extract knowledge from an image that they might not see in the numbers. Her forward-thinking solution showed that preventable causes of death (in blue) far outweighed casualties from battle. The figure eventually evolved into what we know today as pie charts.

Q5. What is on the horizon for the field of science visualization?

Bang: For biological data, it’s clear we need more ways to display data. I have witnessed researchers struggle with how to capture the complexity of what they want to show using traditional graphs and charts. This goes for making figures for papers as well as designing analysis tools. It’s a difficult problem.

On the horizon are likely more computational power and savvy algorithms for reducing data dimensions. Principles from art and design are becoming more relevant as we depend more and more on visualization. We may involve disciplines such as cognitive psychology and human perception to help us understand the psychology of seeing and how we see affects what we see.