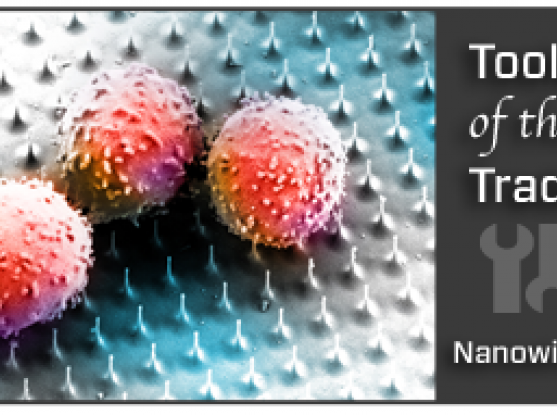 Tools of the Trade: Nanowires
By Veronica Meade-Kelly
Prick your finger with a pin, and you’re likely to have a reflexive response – possibly blood, a jerk of the hand, and an anguished cry. Penetrate the skin with a finer tool, however, such as an acupuncture needle or a mosquito’s proboscis, and the reaction – if there is one – might not be as...

Prick your finger with a pin, and you’re likely to have a reflexive response – possibly blood, a jerk of the hand, and an anguished cry. Penetrate the skin with a finer tool, however, such as an acupuncture needle or a mosquito’s proboscis, and the reaction – if there is one – might not be as immediate or severe; the piercing invader is simply too slight to notice.

Scientists are using this principle to their advantage in the study of cells. Broad associate member Hongkun Park and his students, Alex Shalek and Jellert Gaublomme, have created a nanoscale tool made of silicon nanowires – visually reminiscent of a "bed of nails" -- that can penetrate cell membranes and deliver biochemicals directly into living cells. They recently used this cutting-edge technology to explore the molecular circuitry of T helper 17 (Th17) cells – a type of white blood cell thought to play a role in autoimmune disease.

"The technology is extremely simple," explained Shalek, who is a postdoc in Park’s lab. "What we've made is simply a bed of silicon nanowire needles on which we can plate cells. We can coat these needles with biomolecules and, as the cell settles down, the needles pierce the cell membrane and deliver whatever's coated on their surface into the cell."

Park, who is also a professor of chemistry and of physics at Harvard University, said that his lab’s original goal for their nanowire technology was to develop a computer chip-like tool that could connect to the brain – one that would allow them to "eavesdrop" on the activity of brain cells, to learn how they communicate with each other. (They were able to create a prototype for such a device, which you can read about here.)

Through the course of their research, the team realized that the silicon nanowires, when positioned vertically, could also be used like needles to deliver biochemical cargo inside living cells. They published those findings in PNAS in 2010.

"People have known how to make nanoscale structures,” Park said. “We wanted to use those mature technologies for biological purposes. What we found along the way was that these needles – the simplest possible structures – could give us direct physical access to the interior of a living cell.”

Despite this revelation, Park said that his team remained uncertain how to apply the technique. A chance meeting with Aviv Regev, a core member of the Broad Institute and director of its Klarman Cell Observatory, and Broad senior associate member Nir Hacohen, pointed them in the right direction: they thought that the novel technology might be used to study immune cells – cells which are notoriously delicate and difficult to study.

"Immune cells are evolutionarily designed to detect pathogens," Park explained. "Whenever people tried to deliver foreign molecules to them using conventional means, the immune cells detected them as threats and started their immune responses."

That response caused rapid changes within the cells that made them hard, if not impossible, for researchers to study. What was needed was a way to perturb the cells – to introduce biochemicals that might tweak their cell circuitry – without initiating that immune response. With this in mind, Park’s lab, in collaboration with Regev, Hacohen, and Catherine Wu, a Broad researcher at Dana-Farber Cancer Institute, tested the nanowire technology on a variety of immune cells to see if the nanowires could deliver their cargo without the immune cells taking notice.

"Amazingly, the cells were fine: they were surviving, dividing, and functioning normally as far as we could tell," Park said. "This opened the door to using nanowire-based perturbation to study the intracellular circuits responsible for immune cell function."

Subsequently, Park’s team collaborated with Regev’s group and Broad associate member Vijay Kuchroo’s lab to use the technology to test the circuits of a particular type of immune cell known as a Th17 cell. You can read about the results of their work – and the surprising findings it led to – in a Broad press release and in this week’s issue of Nature. A video about the research can also be found online.

The collaboration marked the first large-scale screen conducted with the new nanowire technology. The team is continuing to look for factors that may play a role in Th17 activity, with the goal of identifying potential drug targets for autoimmune disease. They are also using the technology to study different types of immune cells and other finicky cell types.

"I think this technology is going to revolutionize the way that this type of experimentation is done," said Kuchroo, who is also a professor of neurology at Harvard Medical School and Brigham and Women’s Hospital. "Every time I give a talk and show this bed of nails with the cells sleeping on top of it, and people see the results, almost everybody wants to use the technology."