Finding the mutations that matter 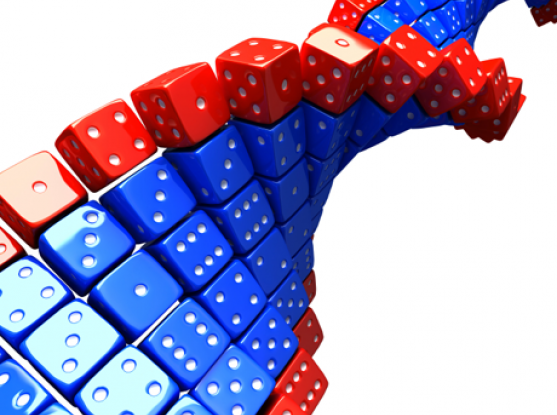 DNA Dice
By Veronica Meade-Kelly
A major endeavor in genomics research, at the Broad Institute and beyond, is to identify the variations in the human genetic code that may be associated with disease. Such variations can point to potential drug targets or shed light on the biological mechanisms underlying a disease. Complicating...

A major endeavor in genomics research, at the Broad Institute and beyond, is to identify the variations in the human genetic code that may be associated with disease. Such variations can point to potential drug targets or shed light on the biological mechanisms underlying a disease.

Complicating the picture for researchers – particularly for complex conditions such as autism spectrum disorder (ASD), which result from mutations in many genes throughout the genome – is that genetic variation, itself, is normal and expected, and most variants are harmless. Yet these harmless variants pop up in genomic studies just the same, adding background noise that researchers must sift through to find the real culprits in disease.

At the Broad, senior associate member Mark Daly and members of his lab had run into this problem while conducting research on spontaneously arising (termed “de novo”) mutations in ASD. De novo mutations, which are believed to play a role in at least 10% of ASD cases, are genetic variants that appear in the genomes of offspring but not in their parents’ DNA, and are therefore not inherited. The researchers’ work used exome sequencing, which examines the genetic code in the protein-coding regions of the genome, to identify de novo variants in ASD patients. However, while instances of de novo mutations “piled up” in certain genes, the team recognized that these pile-ups alone didn’t mean the genes were involved in ASD. They needed a way to determine whether a pile-up resulted by chance – meaning the mutations were likely harmless – or if it indicated that the mutated gene was indeed a “disease gene.”

Their solution to this problem was published online this week in Nature Genetics. In their paper, Daly’s team describes a method they devised to determine which de novo mutations found in ASD cases may actually be contributing to the disorders.

The team, led by Daly and first author Kaitlin Samocha, developed a mathematical framework to calculate the frequency with which de novo mutations are likely to occur in each gene in a healthy population. They also used it to identify a sub-set of genes that tended not to harbor mutations in humans. These genes, they reasoned, had been protected through the course of evolution.

“These are genes that don’t really tolerate change,” Samocha explained. “Most genes can be changed slightly and it doesn’t have a particularly bad effect, but these genes are sensitive: mutations in these genes tend to cause diseases or other harmful phenotypes that are so severe that the mutations aren't passed on to children, so they don’t stick around in the population.”

Once the team made their calculations, they compared their expected de novo mutation rates to findings from older exome sequencing studies (including a 2012 study from Daly’s lab) of ASD patients and their families. The goal was to figure out which of the genes that were frequently mutated in ASD samples actually contributed to ASD, as opposed to simply appearing at the rate expected by chance. They found that de novo loss-of-function mutations – variations that inhibit the activity of a gene – play a significant role in ASD.

They also found that these loss-of-function mutations tended to arise in the genes found to be conserved through evolution, suggesting that the mutations have severe consequences and likely play a role in disease risk.

“We found that severe, spontaneous mutations contribute substantially to autism with concomitant intellectual disability, but very little or not at all to autism cases with normal IQ,” said Daly, who is also an associate professor at Harvard Medical School and chief of the Analytic and Translational Genetics Unit at Massachusetts General Hospital’s Center for Human Genetic Research. “This suggests that these de novo mutations are fundamentally involved in brain development rather than the core traits of autism.”

The authors emphasize that one of the advantages of their model is that it can be applied to other exome and genome sequencing studies, many of which are similarly plagued by background noise that complicates the genetic picture.

“Autism was a particularly interesting test case, but this model can be used to study any disease,” said Samocha, who is a graduate student in Daly’s lab. “The fact that it gives you a rough idea of how mutable one gene is versus another gene, I think, is going to be extremely helpful in the context of other complex diseases to help determine which mutations are likely pathogenic versus those that are likely benign.”

The method is already being applied in studies on cardiac disease, schizophrenia, and other conditions.


Researchers from the Broad’s Stanley Center for Psychiatric Research and its Program in Medical and Population Genetics were involved in this study. In addition to Samocha and Daly, Broad researchers who contributed to the work include Elise Robinson, Christine Stevens, Andrew Kirby, Daniel MacArthur, Stacey Gabriel, Shaun Purcell, and Ben Neale.

For more information on the Stanley Center for Psychiatric Research or the Program in Medical and Population Genetics (MPG), visit the Broad website. For in-depth discussions on genetic variation and the role it plays in human disease, check out the Broad Institute MPG Primers on iTunes U.