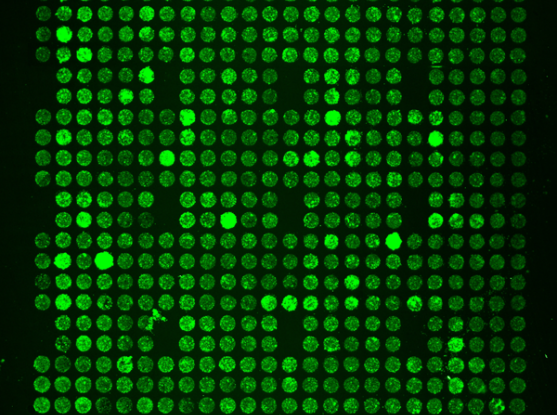 By Leah Eisenstadt
A team of researchers at the Broad Institute recently revealed a new cell microarray capable of probing the functions of genes faster and cheaper than ever before. The screening array, known as MicroSCALE, is the result of efforts by Broad senior associate member and Whitehead Institute for...

A team of researchers at the Broad Institute recently revealed a new cell microarray capable of probing the functions of genes faster and cheaper than ever before.

The screening array, known as MicroSCALE, is the result of efforts by Broad senior associate member and Whitehead Institute for Biomedical Research member David Sabatini, RNAi Platform director David Root, and colleagues to “shrink” the process of so-called “functional genomics.” The portable array captures many of the best features of existing methods while overcoming their limitations, representing another powerful tool in the RNAi Platform’s toolbox for probing gene function.

Aware of the limitations of existing methods – high cost, limited access, and low throughput – David welcomed engineer Kris Wood into his lab as a postdoctoral researcher. “I was this engineer who was really interested in large-scale genomic biology, both developing and using the tools,” says Kris, who is first author of the new work. “It was a perfect fit, because David was aware of these issues [with current methods] and I had the ability and desire to make these tools.”

Kris describes the challenge they faced to develop the MicroSCALE technology. “It was a really significant undertaking, because it’s a huge engineering problem,” he says. “How do you concentrate thousands of viruses in one day? How do you make the array very uniform? And how do you measure phenotypes of interest in a very short amount of time?”

After more than two years of work, the team had an innovative platform for investigating genes, but they didn’t stop there. “We said let’s not just make technology for technology’s sake. We want to use it to uniquely answer questions,” says Kris.

The researchers chose to focus on an emerging clinical problem: drug resistance in melanoma, the most deadly form of skin cancer. Half of all melanomas harbor a mutation in a gene called BRAF, which regulates a cellular pathway known as the MAP kinase pathway. The FDA recently approved a powerful new drug that inhibits mutated BRAF and causes tumors to shrink in many patients. The success, however, is short-lived: the cancer comes back within a year.

Collaborating with scientists in the Broad’s Cancer Program, the team used the MicroSCALE platform to reveal genes underlying resistance to drugs targeting the MAP kinase pathway, critical to survival and growth of melanoma cells.

This work represents an innovative new mechanism for scientists to investigate the roles of genes in a wide variety of biological processes. Kris shared with us some stunning images of this new tool in action. Enjoy!