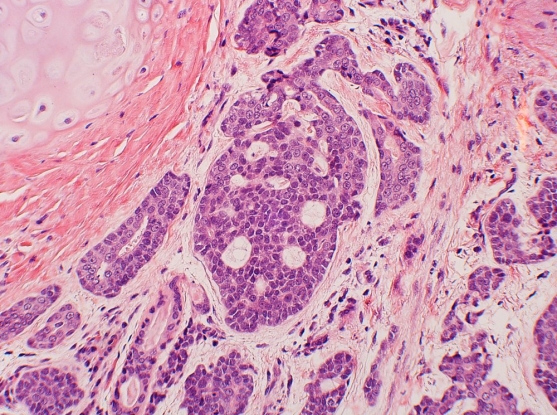 Adenoid cystic carcinoma is a cancer of the salivary glands that is difficult to treat. New research from Broad may hold therapeutic promise for some patients. Image by Yale Rosen.
By Angela Page
Cancers can be cunning beasts and one of their favorite opportunities is something called a chromosomal translocation. Chromosomes are the 23 packages in every cell of condensed DNA. Translocations happen when the DNA breaks and the ends reattach elsewhere. DNA breakage actually occurs somewhat...

Cancers can be cunning beasts and one of their favorite opportunities is something called a chromosomal translocation. Chromosomes are the 23 packages in every cell of condensed DNA. Translocations happen when the DNA breaks and the ends reattach elsewhere. DNA breakage actually occurs somewhat frequently, even in healthy individuals. But a series of ancient and very smart cellular processes ensure that things get put back in the right place — except when they don’t.

Many cancers come about because a DNA breakage does not get properly fixed. A piece of DNA from one chromosome ends up on another chromosome, leaving two genes sorely confused; the gene from which the DNA came is left with a gaping hole, while the gene into which it jumps is now riddled with new information. If that jump leaves a promoter (i.e., a genetic “on switch”) hanging out beside a gene whose overexpression can cause cancer, well, you may just end up with cancer.

That’s the standard operating procedure for cancerous chromosomal translocations. But in adenoid cystic carcinoma (ACC), a cancer of the secretory glands, a translocation occurs in which an entire cancer gene makes the jump without breaking the sequence on either chromosome. This curious phenomenon got a group of Broad researchers, led by epigenomics program co-director Brad Bernstein and associate member Birgit Knoechel, scratching their heads.

ACC tumors most often occur in the head and neck. “Because of their proximity to the facial and nervous structures of the face, they’re difficult to resect,” said Knoechel, who is also a pediatric oncologist at the Dana Farber Cancer Institute. They’re locally aggressive and spread along the nerves of the face, so full surgical removal (resection) is very challenging to achieve. To make matters worse, ACC does not respond to radiation or chemotherapy. It is often fatal.

In a new paper published this week in Nature Genetics, Knoechel and Bernstein, along with first author Yotam Drier and other colleagues, explore the implications of this special kind of translocation. In ACC, the gene that jumps is called MYB and it codes for a protein that is involved in cellular differentiation and proliferation. It is dysregulated in a variety of cancers including breast cancer, pancreatic cancer, and leukemia.

Because the MYB translocation retains the entire gene, its promoter remains intact as well, which means MYB expression can carry on uninterrupted, said Bernstein, who is also a faculty member in the Department of Pathology at Massachusetts General Hospital. But the curious thing is that whenever MYB is translocated (as seen in the 15 tumors the group studied), the translocation also ‘hijacks’ (or repositions) a super-enhancer near the MYB gene, presumably activating it to higher levels.

Enhancers are stretches of DNA that boost the expression of other genes, Drier explained. (“Super” enhancers are just particularly strong enhancers.) They don’t need to be right next to the gene in question, but just close enough so that the DNA can fold and loop onto the promoter, which triggers gene expression. Strikingly, the authors discovered that the MYB protein, produced by the MYB gene itself, likes to bind the two translocated super-enhancers. MYB binding appears to further activate the super-enhancers and drive the expression of MYB even higher, creating a positive feedback loop in which MYB gets turned on to synthesize its protein, which then binds to the super-enhancer, which in turn promotes more MYB transcription, which creates more MYB, which binds to the super-enhancer, and so on.

“This is what I find exciting about this work, personally,” said Drier. “This oncogenic feedback loop is a totally novel concept.”

Bernstein agreed, and said he expects that “similar mechanisms for amplifying gene activity are likely to turn up in other cancers.”

The team next turned their efforts towards figuring out the biological implications of the cancerous feedback loop they discovered. They looked at all the places MYB binds in ACC tumors, and found that MYB binds to many other enhancers across the genome in addition to the translocated super-enhancers. They also noticed two other frequent occurrences: first, MYB often co-binds with a transcription factor called TP63. Second, MYB often binds to genes in the developmental regulatory program known as Notch. But curiously, these two common events never overlapped.

ACC tumors come in three sorts: grade 1, grade 2, and grade 3. Grades 1 and 2 (the “low grade” tumors) are a mashup of two types of cells: myoepithelial cells and luminal epithelial cells. MYB only co-binds with TP63 in the myoepithelial cells, while the Notch program is active only in the luminal cells, Drier said, leading the researchers to suspect two unique and opposing cancer-causing programs in the different tumor types.

As MYB is both activated and functions through enhancers, ACC may be susceptible to bromodomain inhibitors which interfere with enhancer function. Using in vivo models of ACC, the team found that these drugs significantly slowed growth of grade 2 tumors, but not high grade tumors. The team plans to continue searching for therapeutic avenues that could address that part of their discovery.

This work holds promise not just for ACC patients, but for cancer research in general. Super-enhancer hijacking had formerly only been seen in a few cancer types, including certain types of leukemia and lymphoma, but this work suggests it might be a more widespread phenomenon — especially in tumors that are characterized by overexpression of a key transcription factor like MYB. Many pediatric cancers fit that bill, said Knoechel.

By combining next generation sequencing technology to identify genomic aberrations (such as translocations) with epigenetic mapping to identify enhancers and MYB binding sites, the team uncovered fundamental aspects of ACC that had previously evaded researchers.

Pardis Sabeti: How we'll fight the virus next time
Good apart, better together