The drug works…but why? 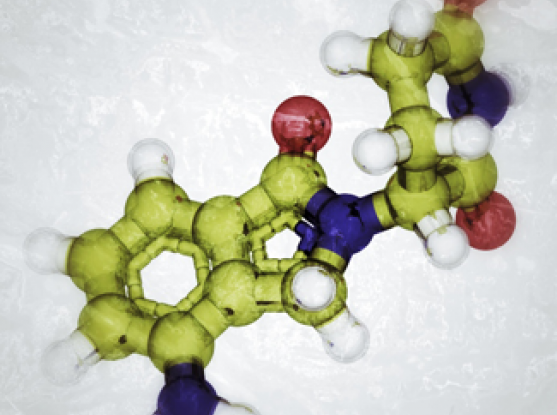 Lenalidomide structure
By Veronica Meade-Kelly
What: A team led by Broad scientists has uncovered how the cancer drug lenalidomide works. Lenalidomide has been used for nearly a decade to treat multiple myeloma and other disorders that affect blood cells found in bone marrow, but its exact mechanism of action hadn’t previously been understood...

What: A team led by Broad scientists has uncovered how the cancer drug lenalidomide works. Lenalidomide has been used for nearly a decade to treat multiple myeloma and other disorders that affect blood cells found in bone marrow, but its exact mechanism of action hadn’t previously been understood.

To figure out lenalidomide’s modus operandi, the team used a quantitative proteomics approach to track the proteins and peptides in multiple myeloma cells exposed to the drug. They found that lenalidomide makes a particular enzyme called CRBN-CRL4 bind more readily to two protein targets, IKZF1 and IKZF3. Both of these proteins are transcription factors — proteins that control how genetic instructions are read in the cell — and both are essential for the survival of multiple myeloma cells. When the enzyme targets those transcription factors, it “ubiquitinates” them in a process akin to marking a building for demolition. This signals the cell to degrade the proteins, halting the growth of multiple myeloma.

“Until now, no drug has been found to work like this,” explained Broad associate member Benjamin Ebert. “Lenalidomide acts through a novel mechanism of action: activating a ubiquitin ligase to degrade specific proteins that might otherwise be considered ‘undruggable’.”

Ebert and his colleagues worked with the Broad’s Proteomics Platform to use a suite of methodologies developed by the platform to use lenalidomide as "bait" and “fish” for cellular proteins that would bind to the drug. The methods enabled them to monitor and measure the abundance and modification states of proteins in the lenalidomide-treated cells, and home in on the exact transcription factors involved.

Their study, for which Ebert served as senior author, was published online by Science. It appeared with a companion paper that used a different methodology to draw the same conclusion about lenalidomide’s mechanism of action. The companion paper suggested that understanding this molecular process might make it possible to dissociate the drug’s therapeutic activities and its side effects: lenalidomide, a derivative of the infamous drug thalidomide, has been associated with birth defects.

Who: A team of researchers from the Broad Institute, Brigham and Women’s Hospital, and the Dana-Farber Cancer Institute.

Why: “This was a compelling case where we had an FDA-approved drug that was highly effective in treating a particular subtype of cancer, yet we didn’t understand how the drug worked,” said Ebert, who is also an associate physician at Brigham and Women’s Hospital. “We wanted to solve that mystery because, if we understand how a drug works, we have the potential to develop novel therapeutics that act by a similar mechanism.”

Where to find it: Both papers — Krönke et al. and Lu et al. — appear in the journal Science.