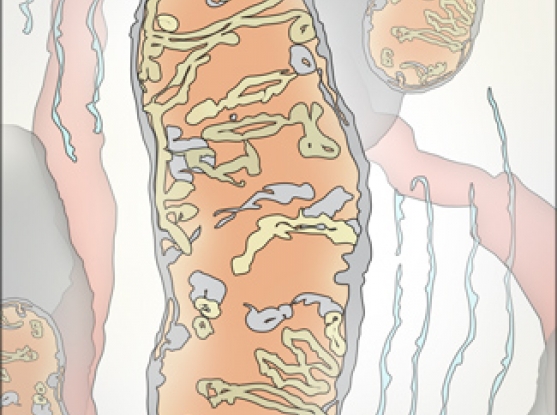 By Haley Bridger
When mitochondria fail, the results can be devastating. Mitochondria are found in almost every cell in the human body (except for red blood cells) and are responsible for producing 90 percent of the ATP (energy units) we need to grow and survive. If mitochondria are compromised, the parts of the...

When mitochondria fail, the results can be devastating. Mitochondria are found in almost every cell in the human body (except for red blood cells) and are responsible for producing 90 percent of the ATP (energy units) we need to grow and survive. If mitochondria are compromised, the parts of the body that need energy the most – the heart, brain, liver, muscles, and lungs – can become damaged. Mitochondrial diseases mainly affect children, and for many, the disease is an inherited condition. But the precise genetic abnormalities that are at fault remain unknown for many forms of mitochondrial disease.

Broad associate member Vamsi Mootha and his collaborators want to shed light on the underlying causes of these diseases by sequencing all of the regions of DNA that code for mitochondrial proteins. The technique, called MitoExome sequencing (the “exome” refers to the small fraction of the genome that codes for proteins), is beginning to bear fruit. This week, Vamsi and his colleagues report in the journal Cell Metabolism that they have performed this sequencing on two patients with a mitochondrial disease known as Leigh syndrome and have found mutations that impair an enzyme that plays an important role in creating mitochondrial proteins. This is the first time anyone has identified mutations in this enzyme and linked them to a human disorder. But the discovery of these mutations was only the beginning – the Broad researchers wanted to dive deeper, to find out more about this gene, its role in the body, and what happens when things go wrong.

To do so, they partnered with protein translation experts across the street at MIT. Caroline Koehrer, a co-first author of the paper, works in Uttam RajBhandary’s lab, one of only a handful of labs in the country that run what is known as an “acid urea polyacrylamide gel” for transfer RNAs (tRNAs) – the molecules responsible for bringing the building blocks of proteins together. This experiment allows scientists to separate nearly identical tRNA molecules, for example “uncharged” tRNAs from tRNAs carrying an amino acid.

The mutated enzyme that Vamsi’s MitoExome team pinpointed plays a role early in the creation of proteins – it adds a “formyl” group to one of the mitochondrial tRNAs, a sort of cap that sits on the molecule, marking this tRNA as the initiator tRNA. When everything is running smoothly, proteins are created in the mitochondria without incident, with the formylated tRNA acting as a green light. But when the enzyme is unable to add the formyl group, the result, as co-first author Steve Hershman describes it, is a traffic jam.

“These particular tRNAs are ready to help build a protein, but nothing is happening,” says Steve, a graduate student in Vamsi’s lab. “They get stuck.”

Caroline helped adjust the tRNA gel conditions to measure this particular mitochondrial tRNA in various states. “We were able to see these distinct bands and for us, this was really exciting because for the first time, we were able to see the formylation profile of tRNA in the human mitochondrion,” she says. In both patients, the level of formylated tRNA had dropped below detectable levels, explaining the road block for mitochondrial protein synthesis.

The researchers wanted to take the analysis one step further. They were curious to find out if mitochondrial protein creation could somehow happen without the enzyme responsible for formylation – perhaps tRNAs could take alternate routes to avoid the traffic jam in patients with the mutation. “We teamed up with the Broad Institute’s Proteomics Platform and looked at the tail ends of the protein in our patients to see if there was any activity, any formylation,” says Steve. “We really weren’t sure what to expect.”

The researchers found that even with the impaired enzyme, most of the mitochondrial proteins in the two patients were formylated, but there were many proteins that were initially defective. The team has some hypotheses to explain these results, including that the process of protein creation in mitochondria might be more fluid than previously thought. Steve refers to this as “biochemical leakiness,” and says that this may account for why some Leigh syndrome patients are still relatively healthy.

“There must be a couple of formylated tRNAs that get generated and start a protein,” Steve hypothesizes. “But the protein initiation events are much less frequent than in normal patients.”

In addition to partnering with researchers at MIT and in the Broad’s Proteomics Platform, the MitoExome researchers also worked closely with David Thorburn’s group at Murdoch Children’s Research Institute in Australia (on this and many other projects). David’s lab specializes in diagnosing mitochondrial diseases by measuring mitochondrial function directly in cells and has provided Vamsi and his team with samples from patients with severe disease. Once the defective enzyme was identified, David’s group was able to show that introducing a copy of the intact gene could reverse disease in tissue culture. This experiment confirmed that the defective enzyme was the underlying cause of mitochondrial dysfunction.

Caroline says that the cross-continent collaboration was an amazing experience. She, Steve, and Elena Tucker in the Thorburn lab co-wrote the Cell Metabolism paper, exchanging papers and data at all hours of the day and night. “I’d check my email at 3 in the morning and there would be an email from Steve or Elena,” Caroline recalls. “At any hour, there was always someone around the globe working on the project.”

Unfortunately, this work does not yet translate into treatment for patients – bridging the gap from the discovery of the defect to fixing it in patients will be an arduous endeavor. But testing for this genetic defect could mean a clearer diagnosis for patients with diseases that are notoriously difficult to characterize.

You can find the Cell Metabolism paper here and read more about the MitoExome project in a Broad Project Spotlight.

Visualizing the cancer genome
Word of the day: Fusion gene