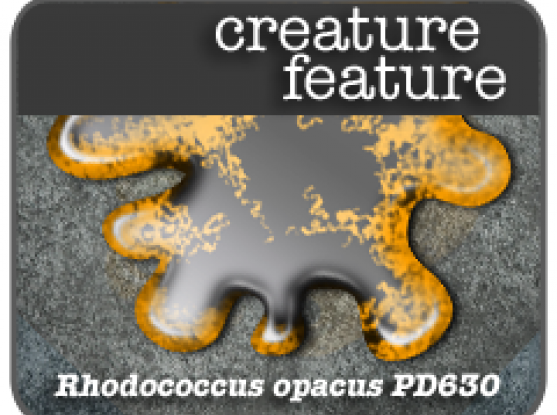 By Alice McCarthy
Oil manufacturing may not be the first idea that comes to mind when considering the function of bacteria. But an unusual bacterial strain, Rhodococcus opacus PD630, does just that, naturally producing and storing up to 80% of its dry weight in oil. This unique feature caught the attention of...

Oil manufacturing may not be the first idea that comes to mind when considering the function of bacteria. But an unusual bacterial strain, Rhodococcus opacus PD630, does just that, naturally producing and storing up to 80% of its dry weight in oil. This unique feature caught the attention of researchers at MIT and the Broad Institute who together pursued understanding the bacteria’s genomics. The team published their work in PLoS Genetics today not only describing its genetic sequence but also how the bacterium’s metabolism produces all of that oil. “Our goal was to trace a complicated metabolic product back to an original DNA sequence,” says first author of the paper Jason Holder, former postdoctoral associate at MIT and visiting scientist at the Broad Institute, explaining the metabolic reconstruction process he and his colleagues pursued to link DNA sequences with metabolic function.

The end goal is to see how Rhodococcus produces its oily interior so that this process can be genetically manipulated to yield large quantities of bacterially-synthesized oil or biofuels. “We want to figure out genomics techniques as a way to engineer biofuels more effectively,” says Jason. “If we understand the genetic basis of developing biofuels then we could manipulate the process, moving genes in and out of that species as a test of principle as well as engineering endpoint.”

Toward that goal, the researchers also needed to know what Rhodococcus prefers as its food source. The MIT scientists showed that when presented with a menu of 190 organic compounds, Rhodococcus opacus PD630 prefers a collection of about 90 from a variety of chemical classes. Rhodococcus opacus PD630 was first isolated from a soil sample at a German gasworks plant and ingests toxic carbon-containing compounds that would kill most bacteria, including polychlorobiphenyls (PCBs) and Lindane, a pesticide formerly used in large quantities but now banned. The bacteria grow in soil containing a high concentration of organic compounds. In fact, after Rhodococcus opacus PD630 was first found, it was further cultivated on phenyldecane, a truly noxious organic molecule.

This information will be essential for transforming low-cost organic material into oil. “Knowing what makes the bacteria thrive gives us another viewpoint of the genetic pathways used by the bacteria to break down those specific compounds as food,” explains Jason. “That gives a more complete picture of the metabolism – what it eats and what it makes in terms of lipids.”

Rhodococcus has many, many genes dedicated to making lipids. Lipids, a form of fat, are stored as triacylglycerols (TAGs) in Rhodococcus producing its characteristic oily cellular composition. But it was not immediately obvious which gene was doing what. To get at that answer, scientists in the Broad's Genome Sequencing and Analysis Program, particularly those on the microbial genome analysis and annotation team, developed a strategy of predicting the genes’ functions and their role in the bacteria’s metabolism. They took advantage of the similarities between Rhodococcus and another bacterias called Mycobacterium, which causes tuberculosis. Both bacteria make lots of lipids and researchers have been studying how to inhibit Mycobacterium by interfering with its lipid manufacturing. “So there was a lot of information available from the biomedical research field that we were able to use to make a model of how we think Rhodococcus makes abundant lipids,” adds Jason.

From this information, the team focused on close to 300 genes and the enzymes they make that are implicated in lipid metabolism. These enzymes are involved in making the lipids and then converting them over approximately 20 steps to the TAG form stored in the cells of Rhodococcus bacteria. Many of the lipid biosynthesis enzymes in Rhodococcus and Mycobacterium are unusual in that these enzymes are multifunctional with some of them carrying out six different enzymatic reactions in a single enzyme. These bacteria have found ways to rearrange the active areas within their lipid-manufacturing enzymes to create slightly modified functions, adding to the overall diversity of lipids produced by these species.

“Ultimately this analysis helped us develop a model with many genes and enzymes that play a role in making fatty molecules,” explains Jason. Instead of having to look at 8,632 genes, the total number of genes within Rhodococcus, the comparative analysis with Mycobacterium trimmed that number substantially down to a svelte 300-gene total.

Going forward, researchers may apply this science in several ways for biofuel development. “We might alter the Rhodococcus genome according to what would make biofuels of interest,” Jason proposes. “Or, one might try a synthetic genetics approach where large DNA assemblies are created, dedicated to some function, in this case oil production.” With synthetic genetics, researchers can piece together many genes that could potentially carry out an oil-producing pathway (or any other pathway of interest, hypothetically), insert them into bacteria and test if they carry out that pathway as predicted.

This paper sets up the direction for next-generation work by offering a framework to stimulate metabolic engineering. Says Jason, “We know we can successfully move genes back and forth between Rhodococcus and some other bacteria where we can test the functions of genes from one species or genus.” As a result, DNA sequences can become targets for manipulation and strain design to increase production of certain types of lipids or lipids grown on inexpensive carbon substrates.