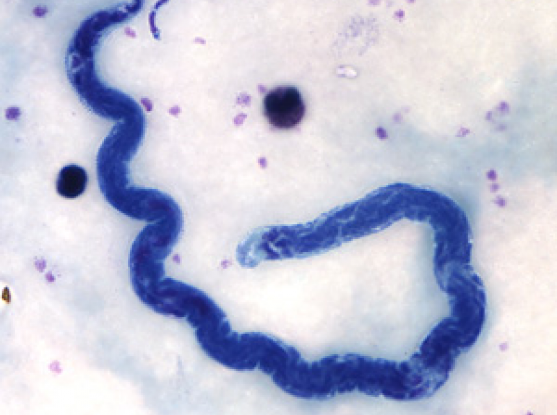 By Leah Eisenstadt
The human microbiome project revealed the vast numbers and types of microbes that live on and in the human body. While this thought may be unpleasant, humans can have larger, more gruesome passengers hitching a ride, such as the several-centimeter-long nematode Loa loa , which infects millions of...

The human microbiome project revealed the vast numbers and types of microbes that live on and in the human body. While this thought may be unpleasant, humans can have larger, more gruesome passengers hitching a ride, such as the several-centimeter-long nematode Loa loa, which infects millions of people in Western and Central Africa.

This parasite enters the human body through the bite of a deer fly and explores the subcutaneous realm of its host, crawling undetected beneath the skin for years, until one day the host feels something strange in his eye. In a scene worthy of a horror flick, he looks in the mirror and discovers a tiny worm wiggling just beneath the surface of his eyeball.

The aptly nicknamed “African eye worm” is endemic to countries like Cameroon and Sudan. Loa loa is a member of the filarial nematode (roundworm) family, which also includes worms that cause river blindness (Onchocerca volvulus) and elephantiasis (Wuchereria bancrofti).

“Filarial nematodes are in general pretty nasty creatures,” says Broad researcher Chris Desjardins. “They don’t get as much press as other things because they don’t kill a lot of people, but they’re really debilitating.”

He explains that while Loa loa does less damage than a few of its filarial cousins, sometimes causing pain or swelling under the skin, it is still “horrifying” since the worm often goes unnoticed until it enters the eye. Once detected, infection with Loa loa (loiasis) can be treated with the drug diethylcarbamazine, which kills the immature microfilaria in the bloodstream, and/or surgical removal of adult worms from the eye. (If you’re feeling brave, check out this video of the procedure from the New England Journal of Medicine).

The eyeworm has been getting more attention recently. “While it’s not that bad to have, it’s often really dangerous to kill,” says Desjardins. In areas where Loa loa is endemic, particularly West Africa, people are often also infected with Onchocerca, the roundworm behind river blindness. In an effort to eliminate that disease, Merck &Co., Inc. has run mass drug administration campaigns since 1989 to treat entire communities with ivermectin, a drug that kills the Onchocerca worms and is used in this country to treat heartworm in pets, among other things.

The danger comes when people who are co-infected with both Onchocerca and Loa loa receive ivermectin treatment. The drug kills the immature worms of both species in the host’s bloodstream, and in co-infected patients it can cause severe reactions including encephalopathy, leading to coma or even death. Scientists speculate that killing vast numbers of microfilaria simply overloads the host system, but they need more information on Loa loa itself to fully understand what happens.

“When you’re treated for river blindness, if you also happen to have the Loa infection, it can be really dangerous,” explains Desjardins, who led a recent study to sequence and analyze the genome of the African eye worm in collaboration with scientists at the National Institute of Allergy and Infectious Diseases.

In addition to its growing clinical importance due to serious reactions after ivermectin treatment, Loa loa is an interesting subject of study because it is unique among filarial nematodes. Its pathogenic cousins all host the symbiotic bacteria Wolbachia inside their cells, but Loa loa does not. In worms like those that cause river blindness and elephantiasis, Wolbachia provides an undetermined, yet essential, role.

Prior to the Loa loa study, the leading hypothesis was that Wolbachia offers metabolic support to the worms, providing some essential nutrient. Desjardins and his colleagues hoped the sequence of Loa loa, along with those of Wuchereria bancrofti and Onchocerca volvulus, would shed some light on the host-parasite relationship, in addition to giving scientists valuable data to help explain the dangerous post-ivermectin reactions.

Loa loa wasn’t always Wolbachia-free – it lost its symbiont at some point in evolutionary history. “The idea was that Loa loa must have gained some capacity to get these essential nutrients, since it doesn’t have Wolbachia,” said Desjardins. The researchers looked for signs of Wolbachia genes in the Loa loa genome – evidence of lateral gene transfer from Wolbachia to Loa – but they found none. “The Loa loa genome, metabolically, is virtually identical to those other Wolbachia-containing nematodes. So we really think that the current research focus is barking up the wrong tree.”

The genome analysis rules out the possibility that Wolbachia is a sole provider of some nutrient source, which had been the prevailing hypothesis. More work is needed to uncover this bacterium’s true role and reveal how Loa loa manages to survive without it, potentially making possible new treatment or diagnostic strategies for these debilitating filarial infections.

“Wolbachia is still providing an essential role [to the worms that host it],” explains Desjardins. “But it’s more of a mystery with these results, than it was before.”

In addition to deepening the mystery of Wolbachia’s function, the work revealed genes in Loa loa with homology to human protein kinase genes that are targeted by drugs currently approved for other diseases, offering potential new therapeutic avenues. The work also shed light on the nature of parasitism itself, providing evidence that as organisms like Loa loa become parasites, they surrender their ability to deal with environmental complexity.

To learn more about the genome study and its other findings, see the original article in Nature Genetics: