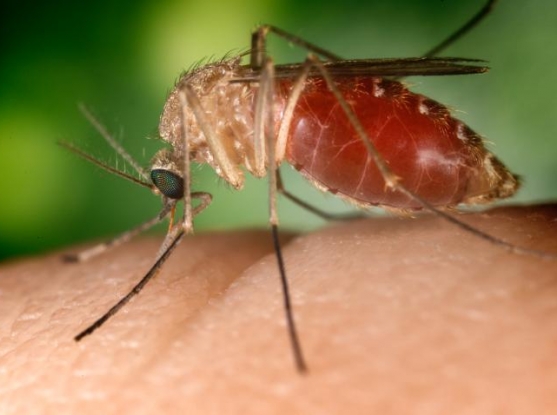 A female Culex quinquefasciatus mosquito after a bloodmeal.
By Alice McCarthy
In a paper describing the genomic sequence of the Culex quinquefasciatus mosquito, researchers have completed a remarkable sequencing trifecta. The Culex mosquito is one of three kinds of mosquitoes, along with Anopheles and Aedes , known to transmit clinically important human diseases, like...

In a paper describing the genomic sequence of the Culex quinquefasciatus mosquito, researchers have completed a remarkable sequencing trifecta. The Culex mosquito is one of three kinds of mosquitoes, along with Anopheles and Aedes, known to transmit clinically important human diseases, like malaria, Dengue fever, West Nile virus, and elephantiasis. Having the Culex genome in hand makes it possible to compare these three groups (called “genera”) of mosquitoes to understand how they respond to bacteria, viruses and other disease-causing "vectors".

The Culex mosquito transmits pathogens when taking bloodmeals. These pathogens include arboviruses, such as the West Nile virus and St. Louis encephalitis virus, as well as tiny worms known as filaria.

In the October 1 edition of Science, an international team of 69 researchers, including those at the Broad, published the Culex genome sequence. Anopheles gambiae, which transmits malaria, was sequenced in 2002, and Aedes aegypti, which transmits Dengue fever, was sequenced in 2007. “Having this third leg of the stool enables a three-way comparison of these major disease vectors using mosquito comparative genomics,” says Marc Muskavitch, an associate researcher at the Broad Institute, DeLuca Professor of Biology at Boston College, and Adjunct Professor of Immunology and Infectious Diseases at the Harvard School of Public Health.

Harnessing the Culex genome sequence, Marc led another international team to compare the three mosquitoes’ responses to arboviruses, filarial worms, malaria and bacteria. These results were published in a companion paper in the same edition. “Based on 25 different experiments, we looked at the similarities and differences in response to the different classes of pathogens,” Marc explains. Mosquitoes do not produce antibodies based on adaptive immune responses; they only produce innate immune responses, or non-specific defenses that aren’t tailored to a particular pathogen. Marc’s team found that in the three mosquito genera, viruses and filaria fly under the immune radar, tending not to provoke innate immunity.

It appears that these pathogens have co-evolved to avoid mosquito immune responses. “This explains why these pathogens can grow so well and be transmitted by these mosquitoes,” Marc explains. “If they were destroyed or impeded by mosquito innate immune functions, then mosquitoes would not be their vectors."

The team found interesting differences among the three mosquito genera. “There is significant expansion of a subset of innate immune functions in Culex for reasons we are working toward understanding, but do not yet fully understand,” Marc says of the 20-30% increase in some immunity gene families found in Culex compared with Anopheles and Aedes. Marc’s team, which included Broad researchers Bruce Birren and Sinead Chapman, as well as Lyric Bartholomay from Iowa State University, Robert Waterhouse from the Swiss Institute of Bioinformatics and many others speculate that this expansion may be related to the fact that Culex loves that dirty water. “Because Culex seems to prefer more microbially-rich (contaminated) environments, it may be that there has been evolution and persistence of a larger number of innate immune functions in this mosquito genus than in the other two genera,” he adds.

Going forward, researchers may choose to follow up on some of the 39 gene products associated with immune responses in all three mosquito types. The most optimistic goal of that work would be to find ways to modulate activities of those genes, making these mosquitoes less tolerant of having pathogens on board, and less of a problem for human health.