Christina Cuomo, leader of genomic research on the fungal kingdom 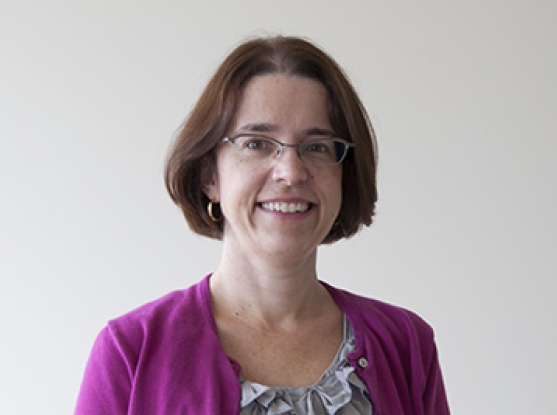 Credit : Photo by Maria Nemchuk, Broad Communications.
By Veronica Meade-Kelly
A microbial genomics expert talks about trends in her field, as well as her approach to mentorship and leadership, in a #WhyIScience Q&A

Christina Cuomo’s interest in science began at an early age. A native New Englander, she fondly recalls going on field trips to Boston’s Museum of Science and looking at slides under a kids’ microscope. She also remembers drawing inspiration from reading a book on Marie Curie and a lot of science fiction. She says that the possibility of discovery—that “Aha!” moment when you find something new—is what always drew her to science.

As the head of the Fungal Genomics Group in the Broad’s Infectious Disease and Microbiome Program, Cuomo has an entire kingdom in which to make unique discoveries. Fungi are an eclectic group of organisms that includes beloved microbes, such as beer- and bread-making yeasts and tasty mushrooms, in addition to some of the world’s deadliest pathogens. Studying this big world of tiny microbes means that work is never slow nor dull.

Cuomo tells us what drew her to this fascinating line of work in this #WhyIScience Q&A:

Q: What is the main focus of your work at the Broad?
A: The focus of my work is understanding how fungal pathogens evolve. Fungal pathogens have a huge impact on human health and also cause major losses in agricultural production. These pathogens are diverse and are continually evolving, which poses major challenges for those trying to combat the damage that they can cause. Drug resistance in human fungal pathogens is a growing concern and new species have been detected in recent years as the cause of severe infections. I use genomic approaches to trace this evolution and identify genes that play a crucial role in pathogenesis.

Q: What, in your opinion, has been your biggest scientific contribution to this field thus far?
A: I think my biggest contribution has been the scope of my work across the fungal kingdom, as well as the application of new technologies at the Broad to provide a deeper insight into fungal evolution. The work of my group has provided the first look at the genomes of important fungal species, including fungi that threaten humans and cause disease in other organisms including bats, amphibians, and wheat, just to name a few.

Q: How did you end up studying fungal genomics?
A: My field of study switched after my postdoc, where I was studying the budding yeast Saccharomyces cerevisiae. I liked the high-throughput approaches that were being used then to study yeast, but I was starting to lean away from bench work and had started taking classes in programming in Perl. I initially took the classes because I needed to parse all the microarray data in my experiments, but I found that I really enjoyed coding and applying that to detect patterns in data.

Around 2001, I heard a talk by Eric Lander at Harvard on the Human Genome Project. A year later, the Broad started the Fungal Genome Initiative and I saw that as an amazing opportunity for collaborative science to really change the playing field for our understanding and study of fungi. It was a bit of a leap to leave benchwork behind and build skills in bioinformatic and computational analyses; my retraining was helped by sitting in on programming and statistics classes at MIT.

Q: Have you had mentors who were particularly helpful in your pursuits?
A: I had people who encouraged me early on to pursue research. With their help I spent a couple summers while in college working in two different research labs, and that was what convinced me to go on to graduate school. Mentors are so important in making those life decisions. That’s why I try to be a mentor for other scientists whenever I can. I’ve mentored people who work for me, visiting graduate students who come to spend a few months working in my group, summer undergraduates, and Broadies through the Broad’s mentoring program.

Q: What is your philosophy or approach as a mentor?
A: Overall, my philosophy is to help people reach their potential, to challenge them to tackle new areas and take on new responsibilities, and to brainstorm together how to meet challenges and take the next steps in their careers.

My advice to researchers new to their respective fields is to take the lead in setting your goals and reach out to people in your network to find a mentor well-suited to help you.

Q: As the Senior Group Leader of the Fungal Genomics Group, what do you think are the most important characteristics of leaders in science?
A: To me, leaders in science help build communities of people working in a similar area, supporting collaborative work and creating bridges across diverse groups and career stages. Leaders are also people who tackle challenging problems and open up fundamentally new areas of research. One of the most pressing challenges for leadership is the need to take steps to increase the diversity of participation in scientific research. Another is to engage the general public.

Anne Carpenter shows that, in biomedicine, a picture can be worth a million data points
Alisha Caliman cuts across disciplines as a computational chemist