A chemist, a compound, and the path from bench to bedside 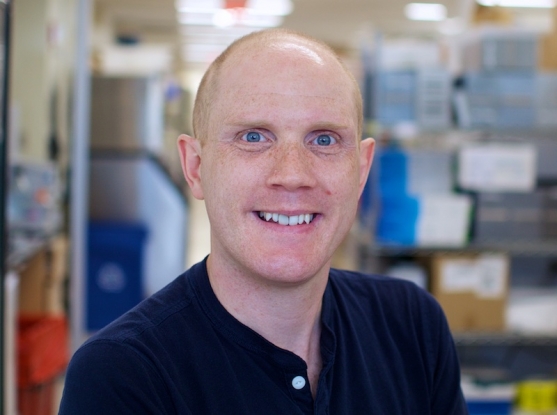 Credit : Donald Raymond
By Tom Ulrich
A Broad chemist talks about his experiences on a team guiding a new targeted cancer treatment to the clinic.

Six years ago, the Broad Institute and Germany's Bayer Pharmaceuticals started working together to transform discoveries in cancer genetics into potential new cancer therapies. One of their first targets: DHODH, an enzyme that plays a key role in acute myeloid leukemia, a common yet intractable adult leukemia. Since 2016 Broad and Bayer scientists have been working together to develop a compound that blocks DHODH into a drug suitable forpatients; its first clinical trial opened in 2018.

Steven Ferrara, a medicinal chemist in the Center for the Development of Therapeutics (CDoT), has worked closely with colleagues at Bayer to prepare the DHODH inhibitor. In a recent interview with Bayer's Innovation + Partnering blog, Ferrara described the part he played:

Can you tell us about your role in the project on the DHODH inhibitor?

My role in the DHODH project was lead chemist in Boston. … My initial involvement was to carry out some investigative synthetic chemistry to develop a molecule that was suitable for use in animal studies. At this point, Bayer got involved and I moved to Berlin to work with the lead optimization team. We were given six months to fully optimize the molecule into a drug-like substance.

Why did you have to optimize the molecule? Can you explain the key challenge?

The molecule was great at inhibiting the biological function of DHODH, but the metabolic stability of the compound was poor. When developing drugs for human diseases we need them to be stable to have the desired effect, and so the goal was to improve its stability and make it suitable for use in humans.

So, as a chemist by trade, is this the first project you have worked on that is moving into clinical development?

Yes! DHODH is my first ever project to move into clinical development. It’s been great to experience this for the first time. I’ve been in my professional career for four years and it’s amazing to see conceptual science developed on the bench have an impact in critically sick patients. It’s awesome to see a project in which I played a key role have a clinical application. We aren’t just doing science for science, we do science help people live healthier and better lives.

Learn more about the Broad/Bayer DHODH collaboration and what drives Ferrera to study cancer treatments on Bayer's website.