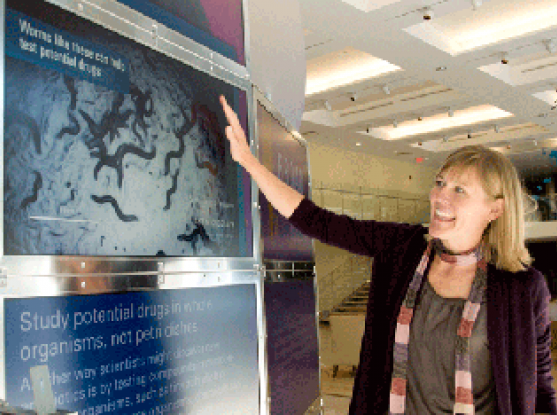 Carolina Wahlby
By Leah Eisenstadt
Here on the blog last month we introduced you to the roundworm C. elegans , a scientific star among worms. At the Broad, a team of scientists led by computational biologist Carolina Wahlby is now helping C. elegans take center stage with new tools for high-throughput analysis of worm images...

Here on the blog last month we introduced you to the roundworm C. elegans, a scientific star among worms. At the Broad, a team of scientists led by computational biologist Carolina Wahlby is now helping C. elegans take center stage with new tools for high-throughput analysis of worm images.

Carolina’s team is working on analytical tools to quickly identify which worms are straight, and therefore dead, in an image to support studies of infectious disease. They are also developing methods to analyze the level of fattiness in these one-millimeter-long worms to support studies of metabolism. Both methods must be highly accurate and robust, since researchers conducting high-throughput studies with worms need to analyze thousands of images from each experiment.

The tools will be incorporated into the popular CellProfiler suite of image analysis tools created by the Broad’s Imaging Platform. CellProfiler gives scientists across the globe an arsenal of analyses to perform on the thousands of images produced by large-scale studies on cells. The new “WormProfiler” tools will bring the ensemble up a level of complexity by enabling automated image analysis of whole organisms.

Although experimenting with cells is a mainstay of biological research, scientists can also take advantage of “whole organism” studies on animals like worms or zebrafish. “If you want to study diseases and biological pathways that involve organ systems, like immune response or metabolism, you can’t really do it on a single-cell level,” Carolina says. “You have to go to the organism.”

With an organ system with many similarities to that of humans but on a much smaller scale, C. elegans makes an ideal model for high-throughput studies. Scientists can fit 15 worms in a single well of a 384-microwell plate, and expose the worms to different treatments, such as potential drugs or RNA interference to silence certain genes. Using the high-throughput imaging technology developed by the platform, they can scan thousands of images to measure how interventions affect the worms.

Carolina joined the Broad in May 2009, after she was recruited by Imaging Platform director Anne Carpenter to develop whole organism image analysis tools. “Being here, I have the opportunity to learn a lot and broaden my perspective, and get closer to the really cool science,” Carolina says.

Carolina explains that automated image analysis is competing against the “really great ability” of the human eye and brain to find objects. Once those objects are found, however, a computer can more accurately and reproducibly measure phenotypic features like size, color, and shape than can a human.

With access to large amounts of data and close ties to the researchers who will eventually use the tools, Carolina says she can develop really functional methods that will actually be used. “It’s not that we solve a problem, publish, and the methods end up in a drawer somewhere,” she says, adding that incorporating the algorithms into CellProfiler will enhance their usability. “Then we can share the methods with others and they’ll actually be used, hopefully by a large portion of the worm community.”

Dog research featured on TV's NOVA
Can you patent a nose? A gene?