Can you patent a nose? A gene? 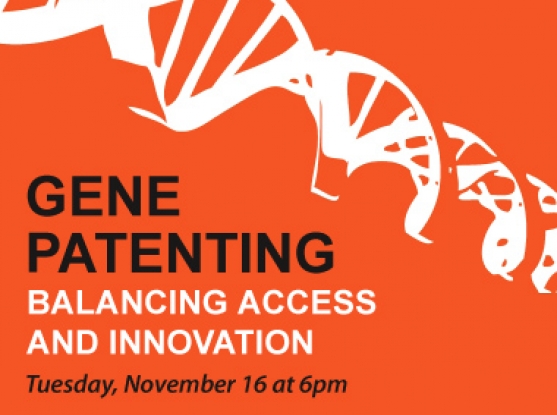 By Ellen Clegg
Can you patent a nose? That was one of a myriad of provocative questions at a recent panel called “Gene Patenting: Balancing Access and Innovation” co-sponsored by the Broad and the American Civil Liberties Union of Massachusetts. (That’s myriad with a lower-case ‘m’ – not to be confused with the...

Can you patent a nose?

That was one of a myriad of provocative questions at a recent panel called “Gene Patenting: Balancing Access and Innovation” co-sponsored by the Broad and the American Civil Liberties Union of Massachusetts. (That’s myriad with a lower-case ‘m’ – not to be confused with the controversy that recently burst into the news in a court case known as ACLU v. Myriad Genetics. The more formal name is The Association for Molecular Pathology, et al. v. The United States Patent and Trademark Office, et al.)

It’s a debate, in part, about the essence of what it means to be human – what it means to carry a set of chemical instructions curled inside each cell that gives rise to the nose, the face, the individual. Can those chemicals be patented? What about the knowhow it takes to isolate them, to ferret out their hidden messages?

The ACLU and the Public Patent Foundation filed a lawsuit in May 2009 challenging patents held by Myriad Genetics and the University of Utah Research Foundation. The patents cover two genes, BRCA1 and BRCA2, which are associated with an increased risk of breast and ovarian cancer, and the suit charged that the patents stifle research, testing, and limit women’s options for medical care.

In March 2010, US District Judge Robert Sweet ruled that the patents were invalid. His reasoning: an isolated gene is not different from a gene in the body – and, so, must be viewed as a natural product. Myriad and the University of Utah have appealed, and the case could advance all the way to the US Supreme Court.

According to an amicus, or “friend of the court,” brief filed in support of the ACLU, “this case challenges the legality and constitutionality of granting patents over this most basic element of every person’s individuality. … Ease of access to genomic discoveries is crucial if basic research is to be expeditiously translated into clinical laboratory tests that benefit patients in the emerging era of personalized and predictive medicine. The patents make ease of access more restricted.”

BIO, a group representing the biotechnology industry, filed an amicus brief supporting gene patenting, arguing that “DNA-based patents are a critical tool that help enable the fundamental research and development of new biotech products, therapies, and technologies to fight deadly diseases, expand agricultural production, clean the environment, and reduce our dependence on foreign sources of oil.” The brief, filed jointly with AUTM (the Association of University Technology Managers), says that isolating a DNA molecule “imparts new utilities and functions that are not available from native DNA.”

The US Department of Justice filed a brief that split the issue down the middle, agreeing that isolated DNA is a natural product that could not be patented but that a “human-made invention” such as DNA that has been manipulated or transformed could be. “The extent to which basic discoveries in genetics may be patented is a question of great importance to the national economy, to medical science, and to the public health,” the Justice Department attorneys wrote.

Gene patenting is not new – about 20 percent of human genes have been patented. But the genes under discussion, BRCA1 and BRCA2, pack an emotional punch. Mutations in BRCA1 and BRCA2 tend to run in families, and women may opt to get a blood test to see if they carry them if close female relatives (a mother, a sister) have been diagnosed with breast or ovarian cancer. Some women who test positive but do not yet have symptoms opt for preventive surgery that removes breasts and ovaries – a decision that can be wrenching. Breast cancer advocates have noted that Myriad charges more than $3,000 to conduct the test, and because it holds the patent, patients cannot get a second opinion from another lab.

After two hours of pointed, but polite, debate, the gene patenting panel at MIT left the audience with a series of probing questions:

• Are genes a natural product protected by the First Amendment of the US Constitution, which protects free speech?

• Are gene patents necessary to spur invention and innovation by private companies that specialize in genetic research?

• Will gene patents prompt the development of new therapies that will help give patients access to treatment? Or will they limit access and options for patients?

• Do gene patents promote or stifle future genetic research and scholarship in academic or government-supported settings?

• What can we learn from the controversy over gene patents about the legal, economic, and ethical value of patents in other fields?

What do you think?

More on this issue:

Commentary on the Children's Hospital Vector blog is here, and a 60 Minutes debate is here.