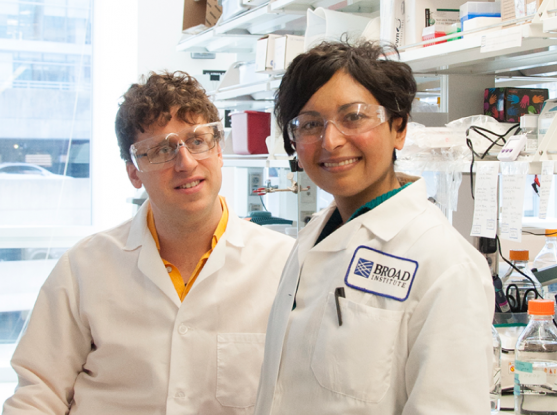 By Paul Goldsmith
Prion disease is the common name for a family of rare, progressive neurodegenerative disorders that can be caused by mutations in the prion protein gene ( PRNP ). These mutations produce misshapen proteins, which accumulate, destroying neurons and leaving the brain with sponge-like holes resulting in dementia, and ultimately death.

Prion disease is the common name for a family of rare, progressive neurodegenerative disorders that can be caused by mutations in the prion protein gene (PRNP). These mutations produce misshapen proteins, which accumulate, destroying neurons and leaving the brain with sponge-like holes resulting in dementia, and ultimately death. More than 60 genetic mutations have been associated with prion disease—and until now, many physicians have assumed that all of these variants confer an identical, 100% likelihood of developing the associated prion disease. But a new paper from Broad Institute husband-and-wife team Eric Minikel and Sonia Vallabh is putting that notion to rest—and giving some patients a life-changing reprieve.

In a study published this week in Science Translational Medicine, Minikel, Vallabh, and their colleagues demonstrate the genetic risk associated with developing prion disease is not in fact universal, but actually varies depending on the exact nature of the mutation. By analyzing the penetrance—the probability that the presence of a gene will lead to disease—of 63 genetic variants across two massive data sets, the researchers were able to show that, while some mutations carry virtually no risk to the patient, others are almost certain to manifest in disease.

In addition to laying out this dramatic spectrum of risk, the study also identified three previously unknown mutations that effectively inactivate or "knock out" one copy of the prion protein gene. These mutations were found in otherwise healthy patients, suggesting that targeting the prion protein itself may be a viable therapeutic strategy. Minikel and Vallabh are now working on related therapeutic discovery research at the Broad.

For Minikel and Vallabh, both Ph.D. students at Harvard Medical School and members of core institute member Stuart Schreiber’s Lab, this study was an intensely personal endeavor. Vallabh carries one of the deadliest PRNP mutations and lost her mother to the disease in 2010.

“Ever since we got our genetic diagnosis, the best possible thing that could have happened is for somebody to call us up and say ‘actually, we made a mistake—you’re not going to die of this disease’,” said Minikel. “As a result of this study, there are actually people out there that are going to get that phone call. And one who already has—and that’s very gratifying.”

You can find out more about that patient in this related perspective piece by medical geneticist Robert Green of Brigham and Women’s Hospital in the new Science Translational Medicine.

To find our more about Eric and Sonia and their efforts to develop a treatment for prion disease, read additional coverage in: