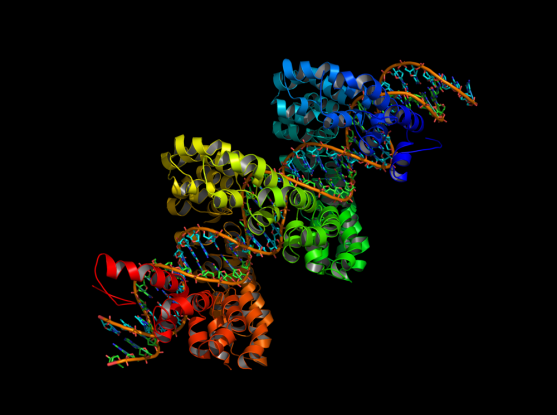 By Haley Bridger
To comprehend a book written in English, readers need to recognize all 26 letters of the alphabet. To probe the inner workings of the genome, researchers need tools that can recognize a much shorter alphabet: the four “letters” or bases (As, Cs, Ts, and Gs) that make up DNA. Just as frequently...

To comprehend a book written in English, readers need to recognize all 26 letters of the alphabet. To probe the inner workings of the genome, researchers need tools that can recognize a much shorter alphabet: the four “letters” or bases (As, Cs, Ts, and Gs) that make up DNA. Just as frequently misreading a letter in the English alphabet can make for a bewildering read, mistaking any of the letters in the DNA alphabet can be a source of confusion too.

Broad Institute core member Feng Zhang and graduate student Le Cong have developed unique tools and technologies to recognize the genome’s alphabet and unravel its mysteries, one gene at a time. The team is especially interested in understanding the intricacies of the brain and the changes that lead to disease. One of the sets of tools they have developed to do this is TAL effectors (more about them here), which the team can custom design to glom on to a specific stretch of the genome. TAL effectors work like a lock and key – the amino acids that compose a TAL effector can only fit into the grooves of DNA at a particular site. In theory this could give researchers a firm grip on any site in the genome they are interested in.

Scientists have great TAL effector tools for seeking out As, Cs, and Ts, but until now, Gs – which stands for guanine -- have been difficult to target.

“Recognizing guanine is very important because the human genome and most animal genomes are GC rich,” says Feng. Plant genomes, on the other hand, have a lower percentage of Gs and Cs. “Being able to recognize G is critical for targeting specific locations in the human genome.”

To solve this problem, Feng and his colleagues turned to nature for a little help. TAL effectors in general are inspired by nature – these proteins were originally found in bacteria that attack rice plants. The researchers looked at 23 TAL effector DNA binding domains known to exist in nature, screening for a design that could specifically recognize Gs. Their results appear in a recent Nature Communications paper.

“For the first time, we were able to demonstrate repression of gene expression by TAL effectors in mammalian cells,” says Le Cong. “This means that now we have bidirectional control – the ability to turn up and turn down gene expression at will.”

Le describes TAL effectors as having a beautiful, sequence-specific interaction with DNA. Recently, two other groups of researchers solved the crystal structure of a complex between TAL effector proteins and double stranded DNA. The protein looks like a spiral staircase wrapped around the DNA molecule, mimicking its structure.

“You can see why some designs fit very well into the DNA structure and recognize it,” says Le. “The DNA structure is not going to change, but you can change the protein to make it a better fit for the DNA.”