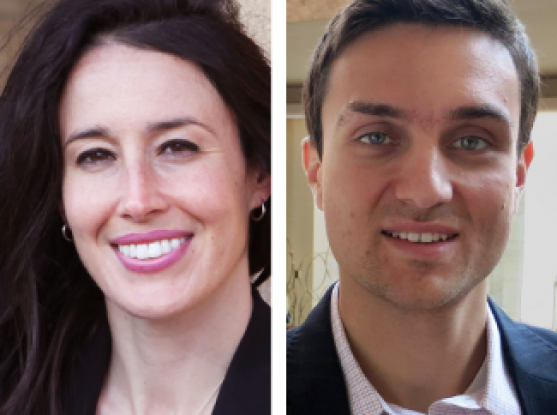 By Paul Goldsmith
The annual Forbes ’30 under 30’ was revealed this week, and two members of the Broad community, Cigall Kadoch and Aleksander Kostic, were named to the list. Now in its third year, ’30 under 30’ recognizes the brightest young talents in 15 different fields, including science and healthcare,...

The annual Forbes ’30 under 30’ was revealed this week, and two members of the Broad community, Cigall Kadoch and Aleksander Kostic, were named to the list. Now in its third year, ’30 under 30’ recognizes the brightest young talents in 15 different fields, including science and healthcare, technology and finance.

As a postdoctoral scholar at Stanford University, Cigall Kadoch helped identify a group of proteins that appear to play a significant role in the suppression of many types of cancer. Working alongside renowned developmental biologist Gerald Crabtree, Kadoch used a series of biochemical experiments in combination with data-mining to identify the protein set, known as BAF, which regulates chromatin structure in cells. Kadoch and her colleagues were able to link mutations in molecular subunits of the BAF complex to more than one-fifth of human cancers. As an associate member of the Broad’s Cancer Program, and an assistant professor of pediatric oncology at Dana-Farber Cancer Institute and Harvard Medical School, Kadoch is applying her knowledge of chromatin regulation and biochemistry to develop new therapies for cancers with BAF mutations.

“I was delighted to learn of this unexpected and impactful recognition,” said Kadoch. “The ’30 under 30’ list is a great way to keep the general public informed about new, and exciting initiatives in science and medicine.”

Computational biologist Aleksander Kostic began studying the gut microbiome as a PhD student in the laboratory of senior associate member Matthew Meyerson. There he helped demonstrate that a germ, known as Fusobacterium nucleatum, may play a role in the development of certain kinds of colorectal cancer. Now working as a postdoctoral fellow under senior associate member Ramnik Xavier, Kostic has expanded his research beyond cancer. Kostic is currently using high-throughput screenings to identify specific microbial products in the gut that play a role in human health and disease.

“It's a tremendous honor to be named alongside such innovative and productive scientists,” said Kostic. “Also, my younger sister got a huge kick out of the fact that my name was right up there with Justin Bieber, Drake, Jennifer Lawrence, and other more recognizable names on the list.”

In addition to Kadoch and Kostic, Broad alumnus Mitch Guttman, now a professor at Caltech, was named to the list for the second year in a row.