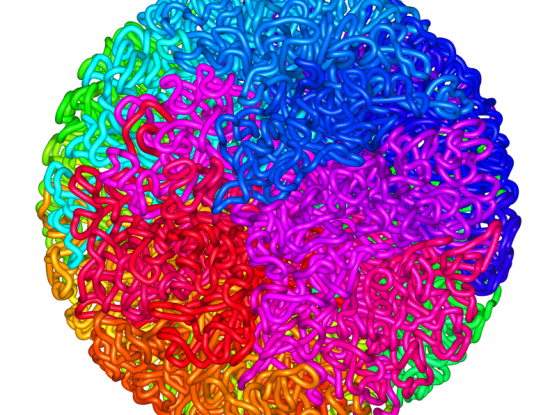 By Elizabeth Cooney
Ramen noodles. Origami. And a ridiculously good hammer. These are just some of the images Erez Lieberman Aiden uses to help us see the entire genome inside the human cell, territory he and others at the Broad charted in a feat combining molecular biology with three-dimensional genome sequencing...

Ramen noodles. Origami. And a ridiculously good hammer. These are just some of the images Erez Lieberman Aiden uses to help us see the entire genome inside the human cell, territory he and others at the Broad charted in a feat combining molecular biology with three-dimensional genome sequencing. Their method zooms in on the cell nucleus to reveal just how the two-meter-long human genome folds itself inside a space several times narrower than a human hair. The work, which Erez embarked upon while he was a student in Eric Lander’s lab, led to a paper published in Science in October 2009, Erez’s 2010 doctoral dissertation at Harvard and MIT, and now the GE & Science prize for Young Life Scientists.

“Spatial maps will help us unravel fundamental mysteries in biology, such as how the cells in our bodies – genetically identical – perform different functions; they will also help us understand cancer, where this differentiation has gone awry,” Erez writes in the Grand Prize winner’s essay published in tomorrow’s issue of Science. Titled “Zoom!” it also enlists cameras, microscopes, and telescopes as metaphors to illuminate how the technique called Hi-C helped breach a barrier to understanding the structure of the human genome.

“One of the biggest challenges in cell biology is that it’s just so hard to figure out what’s going on inside of cells,” Erez said in an interview. A visiting scientist at the Broad, he is also a member of the Harvard Society of Fellows. “No one’s ever been able to take a picture of what an entire genome in a single cell looks like.”

Translation familiar to grad students: uncooked Ramen. The noodles are crammed into a small space, but unentangled: if you pull a forkful out of boiling water to see if they’re done, you can put them back without disturbing the rest.

Outside this fractal globule of the genome, chromosomes clump into two compartments, containing genes that are more or less active. This separation of active and inactive genes suggests that the genome’s folding plays a role in turning genes on and off, Erez said. He calls it “epigenetics via origami.”

What about that big hammer? That would be the power of sequencing, which Erez has been eager to harness to solve big problems in biology.

“It’s an example of, if you have a hammer everything looks like a nail,” he said. “But actually many problems turn out to be nails that you wouldn’t ordinarily have recognized as such, unless you were motivated by having this ridiculously good hammer that keeps getting better every year. If you can translate something into the language of sequencing, that gives you huge advantages.”

If you are interested in learning more about how the genome folds, you can find a Broad news story about the 2009 Science paper here.

A slice of Satsuma
Behind the Scenes: Building the Broad’s cloud