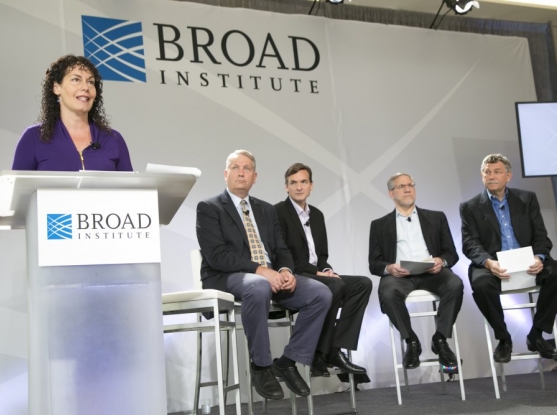 In addition, the announcement of Stanley’s commitment coincided with the publication of a paper in which Broad researchers and a team of international collaborators revealed the discovery of more than 100 regions of the human genome associated with the risk of developing schizophrenia. These findings may point the way to biological mechanisms and pathways, and could eventually lead to new therapeutic approaches.

You can find out more about Ted Stanley, his commitment, and the breakthrough findings announced this week on the Broad Institute’s BroadLive landing page and the following outlets.

From CNN: Identifying the genetic roots of schizophrenia

From the AP: Genetic mapping triggers new hope on schizophrenia

From Business Insider: We are now at a major turning point in understanding mental illness

From The Economist: Some needles in the haystack

From Fierce Biotech: With a $650M gift and a trove of genomic data, Broad sets out to innovate in schizophrenia

From Forbes: How a giant act of philanthropy may kickstart psychiatry

From Inside Philanthropy: Four things to know about that mammoth mental health gift

From LA Times: Immunity, signaling genes may be linked to schizophrenia

From New York Times: Spark for a stagnant search

Newsweek: Breakthrough discoveries and a $650 million gift usher in a new age for psychiatric research

From The Scientist: More schizophrenia-related variants

From TIME: Schizophrenia linked to 108 genes

Broad Paper Vids: Peering into the transcriptome of single cells
Finding the mutations that matter