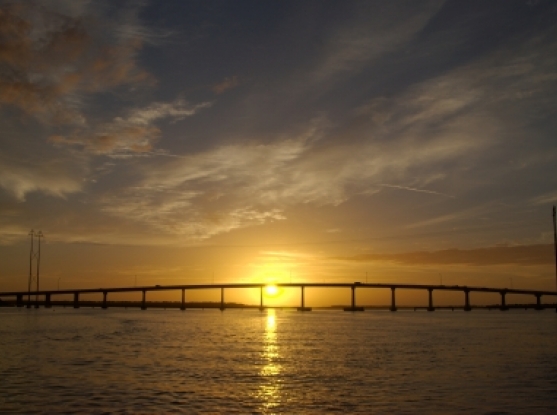 By Haley Bridger
In the world of genome research, the annual Advances in Genome Biology and Technology (AGBT) meeting in Marco Island, Florida, is awaited with great anticipation: it is the time of year when companies often unveil the latest and greatest sequencing technologies that send ripples of excitement...

In the world of genome research, the annual Advances in Genome Biology and Technology (AGBT) meeting in Marco Island, Florida, is awaited with great anticipation: it is the time of year when companies often unveil the latest and greatest sequencing technologies that send ripples of excitement through the blogosphere. At this year’s meeting, which took place earlier this month, there were fewer dramatic technological breakthroughs announced than in years past, but more opportunities for researchers from the world over to share new tools and incremental advancements to help process and interpret biological data. Many researchers from the Broad attended, spoke, or chaired sessions at the meeting. I caught up with Dan Neafsey and Brian Haas, two speakers from the Broad, after the meeting to hear more about the highlights.

One of the themes that Dan and Brian saw in the talks was advancement upstream and downstream of sequencing. By this, they meant researchers are starting with higher quality material that they feed into the sequencers, and are getting better at interpreting the data that come out. Andi Gnirke, director of molecular biology research and development at the Broad, gave a talk on the last day of the meeting about how to avoid one of the big problems at this early stage of the process– introducing “bias” in the data. ‘Bias’ means you get out lots of copies of some parts of the DNA, and few copies of other regions. Part of solving this relied on tips and tricks that Andi presented for adjusting conditions in a PCR thermocycler, a machine used to amplify, or make tons of copies of, a piece of DNA. Being able to avoid these problems early on could help researchers at later stages of the sequencing process. Andi’s group just published a paper in Genome Biology sharing their progress on this front. Check it out here.

Sheila Fisher, assistant director of technology development for the Genome Sequencing Platform, also spoke about improving the sequencing process. Sheila’s group handles many hundreds of cancer samples for the Broad’s Cancer Program (among others), and increasing the “throughput” or scaling up the number of samples handled every day could help make sequencing more robust.

When sequencing data come off of the machines at the Broad, it enters the “Picard pipeline” – a tool for processing and delivering data from Illumina sequencers that Broad senior software engineer Tim Fennell described to the crowd at AGBT. Toby Bloom, director of sequencing informatics development at the Broad, described how researchers in small labs can use cloud computing to access data from Picard and other sources, without having to buy lots of hardware, and what challenges they face in doing so.

Although no new large sequencers were introduced at this year’s meeting, two smaller sequencers did get some attention. The MiSeq, which Dan described as “a little baby” Illumina HiSeq sequencer (a machine that’s closer in size to a refrigerator and can churn out 250 billion DNA bases of data) and the Ion Torrent Personal Genome Machine are both intended for the clinic, where people in the medical field could use them to run diagnostic tests on patient samples.

The hope of bringing discoveries to bear on the clinic was another theme of this year’s meeting. Chad Nusbaum, co-director of the Genome Sequencing and Analysis Program, talked about the technological advancements that have made it possible to view the entire genetic landscape of a person’s — or a tumor’s — genome. Computational biologist Mike Lawrence talked about what this kind of whole genome sequencing has revealed in prostate cancer tumors. (You can read about these discoveries in a recent Broad news story here). However, more research will be needed before these findings can be used in the clinic.

On the final day of the conference, David Jaffe, director of computational research and development, gave what both Dan and Brian described as a significant talk on a new tool known as ALLPATHS-LG that assembles vertebrate genomes from short reads (read more about ALLPATHS here). “It’s a point where two or three years ago we didn’t expect to be,” said Dan. “In one sense, we’ve finally figured out what to do with these short reads produced by Illumina technology.”

Brian also spoke about software tools for assembling short reads, but in this case targeted toward transcript assembly from short reads. Brian described the Trinity software suite, developed as a collaborative effort among several groups at the Broad led by Aviv Regev, Kerstin Lindblad-Toh, and Bruce Birren. Brian says he and co-developers Moran Yassour and Manfred Grabherr are now adding the final touches and will soon release the software here.

In addition to talks on interpreting human genomics, some researchers also spoke about the genomes of other organisms. Kerstin Lindblad-Toh, scientific director of vertebrate genome biology, told the AGBT crowd about the latest research in dog genomics and how her team is leveraging genetic discoveries made in dog breeds to better understand human diseases. Dan’s talk addressed a new application of a technique called hybrid selection. His team has shown that this technique can be used to study the DNA of parasites whose genetic information would otherwise be inextricably mixed together with host DNA. Dan’s team is focusing on separating malaria DNA from human DNA, but at the conference, researchers studying other infectious organisms were eager to ask him for more information. “It seems like there are a lot of applications for this technique,” he says.