Broad artist in residence at MassArt 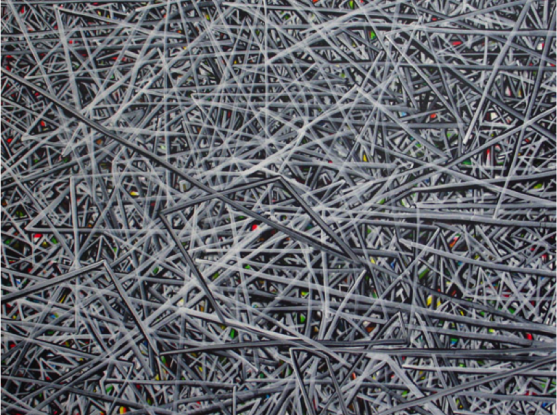 By Ellen Clegg
Look around the Broad's public spaces, and you'll find that the Broad is “Unfolding.” That’s the title of an exhibition featuring the work that artist-in-residence Guhapriya Ranganathan has created during her two-year collaboration with scientists here. Tonight, Ranganathan, known as Gupi, will...

Look around the Broad's public spaces, and you'll find that the Broad is “Unfolding.” That’s the title of an exhibition featuring the work that artist-in-residence Guhapriya Ranganathan has created during her two-year collaboration with scientists here. Tonight, Ranganathan, known as Gupi, will give a talk at the Massachusetts College of Art and Design in Boston about that collaboration. The lecture, titled “At the Crossroads of Art and Science,” is in the Tower Auditorium at MassART from 6:30 p.m. – 8 p.m. An open house follows in the Kennedy Building. Gupi’s lecture is the Fine Arts 2D Annual Open House and Alumna Lecture.

In “Unfolding,” which encompasses video, paintings, prints, and wire sculpture, Gupi explores the process of the genome unfolding and links it seamlessly to the process of scientific collaboration at the Broad.

That’s what the artist-in-residence program is designed for: to stimulate collaborative problem-solving with an interdisciplinary approach. Together, artists and Broad scientists explore issues of visual representation, and the communication of ideas toward a greater understanding of the complexities of the genomic landscape. In her work at the Broad, Gupi collaborated with scientists across disciplines and platforms: Erez Lieberman Aiden; Catherine Luce of the Stanley Center for Psychiatric Research; Dawn Thompson, a research scientist working in core member Aviv Regev’s lab; research scientist Elinor Karlsson; and senior computational biologist Sarah Calvo.

The artworks, which will be on display through early May, 2012, in all four Broad buildings, represent science in all its effortless beauty: the image of a long polymer folded into a fractal globule, lines seen in neural structures, space-filling lines based on the Hilbert curve.

“This is not just about the genome unfolding, but about the work, the ideas unfolding at the Broad,” Gupi says. “’Unfolding’ also means making something apparent and clearer.” She collaborated closely with Erez, who discovered how the two-meter-long human genome folds itself inside an infinitesimal space without tangling (read the Broad news story here). Erez’s work, which he began as a student in the lab of Broad director Eric Lander, led to a paper published in Science in October 2009, Erez’s 2010 doctoral dissertation at Harvard and MIT, as well as the GE & Science prize for Young Life Scientists.

“Erez started off by showing me his paper on the fractal globule and the genome,” Gupi says. “What struck me immediately is that it is a line. In artistic terms, it has line, area, and volume – it takes on a form and shape of its own. I took it home and made a model of it in order to better understand what it meant in visual terms. This pattern became clear in our talks together – when we came across a problem, he would speak about it in mathematical terms and I would be solving the same problem in visual terms.”

Erez enjoyed the collaboration. “I really enjoyed learning from Gupi's creative process, and especially her tendency to do serial visual experimentation: trying a huge number of variants on a single image till she found something that worked,” he says. “This helped inspire my group to explore mathematical variants on the curves we use to help model the genome that we may not have otherwise emphasized.”

Gupi’s large work, “120 Drawings,” - hung against a dramatic black backdrop in the entryway of 7CC - is reminiscent of stop-action frames in an animated film. A line with a life of its own spins out into a shape (is that a T-Rex? A dog? Homer Simpson?) and then dances off again – all within the precisely delimited geometry of a white square. Gupi has trained her analytical eye on the power of simple lines in American culture: “I have been looking at the Simpsons cartoons, because the Simpsons are drawn with straight thin lines. But, at the same time, the lines capture the form and the shape and the expression, and everything comes together.”

Zooming in on early embryonic development
A Sage partnership