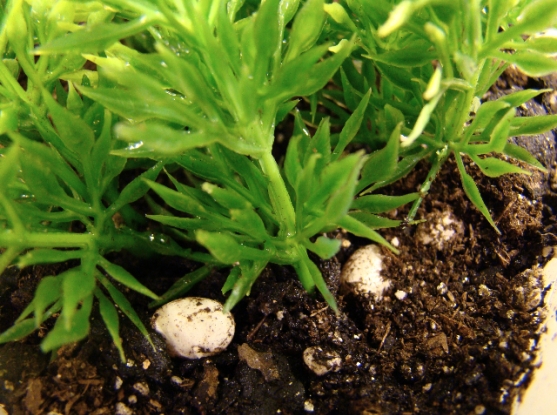 By Haley Bridger
About 340 million years ago, a diminutive vertebrate did something unprecedented: she laid her eggs on dry land. Today, not having to rely on the water to produce offspring may not seem like such a big deal – mammals carry their embryos to term and birds and other reptiles lay their eggs on land –...

About 340 million years ago, a diminutive vertebrate did something unprecedented: she laid her eggs on dry land. Today, not having to rely on the water to produce offspring may not seem like such a big deal – mammals carry their embryos to term and birds and other reptiles lay their eggs on land – but before organisms evolved the amniote egg, four-legged life was water-bound. Laying eggs on terra firma has allowed reptiles and mammals to thrive in new environments across the world.

The anole lizard is a descendent of that ancient amniote ancestor (and so are we). Like birds and other reptiles, anoles hatch from a clutch of eggs. Researchers have long been curious to find out just which gene products (i.e., proteins) are present in these eggs to better understand amniote development. In a grown organism, you can figure out which genes are expressed by looking at RNA. (All cells contain the same DNA instructions, but which of these instructions are rewritten into RNA and therefore translated into protein depends on what kind of cell you are looking at and what conditions that cell is experiencing).

But reptile eggs are different. RNA is made elsewhere in the mother bird or lizard and the RNA or resulting proteins are transferred into the egg. To find out what is in the egg, Broad Institute vertebrate researchers asked for help from their colleagues in the Broad’s Proteomics Platform.

“We had a collaboration with Jake Jaffe in Proteomics and Thom Sanger and Jonathan Losos at Harvard who provided us with immature lizard eggs,” said Jessica Alföldi, co-first author of a recently published Nature paper on the sequence of the green anole lizard genome. “It was a learning experience because the lizard researchers knew very little about the proteomics aspect, and Jake had never looked at the proteins in an immature lizard egg before.”

Jake and his research associate, Sally Peach, started by consulting with an expert: Robin Andrews, a professor of biology at Virginia Tech who studies reptile ecology and evolution. “We spoke to Robin by phone before we ever laid eyes on an actual egg,” says Jake. “She told us we’d to have to have a candle and hold the egg up to it [to see the embryo], but that we would need to be careful because the egg would be under pressure. We didn’t know what that meant until we actually got the eggs.”

When the immature lizard eggs arrived, Jake and Sally began to understand what Robin had meant. The eggs were the shape and size of jellybeans, but had the consistency of gummy bears (the shells of the eggs had not yet developed). When he tried to carefully insert a needle into the egg, Jake felt as though he were pricking a water balloon. Jake and Sally held up each egg to the light to see the outline of the embryo and egg matrix (the reptile equivalent of the albumin or white part of a chicken egg) and were careful to only extract the latter.

“It was immediately fun, just from the harvesting of the sample,” Jake says. “Usually, someone hands us a tube filled with cells or maybe a blood sample or a piece of tissue, but this was an adventure in and of itself.”

With samples in hand, Jake and Sally set to work. The Broad’s Proteomics Platform uses mass spectrometry, which measures the masses of various proteins in a sample. Jake and Sally began with a list of about 20 proteins that the lizard researchers were particularly interested in and used mass spectrometry to search for them. After that, things became more challenging. Most proteomic techniques rely on using a sequenced genome as a starting point, but the lizard’s genome was still in its draft form. This didn’t deter Jake and Sally. They used the preliminary sequence and a technique known as proteogenomic mapping to predict proteins and even correct mistakes in the draft genome.

In one instance, Jake and Sally kept detecting a protein of greater molecular weight than the initial genome information predicted. Using proteogenomic mapping, Jake’s team could trace protein fragments called peptides back to the genome. They quickly saw that one gene had mistakenly been divided up into smaller genes.

“We were able to use the peptides to connect the dots between this gene and that gene and show that in fact, it was all one gene,” says Jake. “And once we did that, the molecular weight made sense all of a sudden.”

The Proteomics team shared their results with Jessica and her colleagues who analyzed the new information about egg-protein genes. They found that overall, egg proteins have evolved significantly faster than other proteins in the genome. This may be key to the evolution of the amniotic egg, and amniotic life as we know it.