The beauty of imbalance 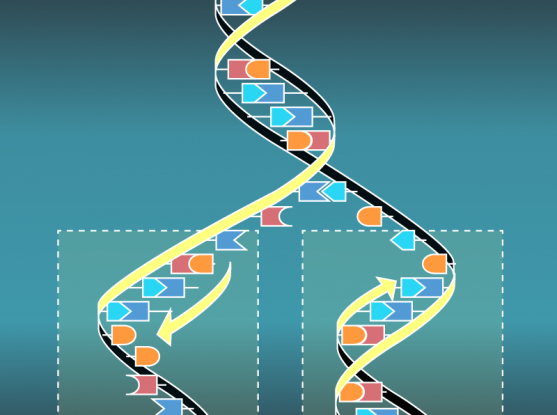 By Angela Page
Every day, every cell in the body picks up one or two genetic mutations. Luckily, cells have a whole battery of strategies for fixing these errors. But most of the time, even if a mutation doesn’t get fixed — or doesn’t get fixed properly — there are no obvious functional implications. That is, the...

Every day, every cell in the body picks up one or two genetic mutations. Luckily, cells have a whole battery of strategies for fixing these errors. But most of the time, even if a mutation doesn’t get fixed — or doesn’t get fixed properly — there are no obvious functional implications. That is, the mutation isn't known to impair the function of the cell. Some mutations, however — called “driver” mutations — do impair the cell, leading to cancer, aging, or other types of diseases.

Identifying new driver mutations (a few hundred genes that carry driver mutations are known so far) is a huge focus for most labs that study cancer, including that of Broad Cancer Genome Computational Analysis group director Gad Getz. But in new research recently published in Cell, Getz and computational biology group leader Michael Lawrence wanted to look at all those other mutations: the “passengers” that may or may not cause cancer. Doing so, they surmised, would not only help them understand the fundamental biology of cells, but may also point them toward new mechanisms for causing mutations associated with cancer.

And that’s exactly what happened. The new work reveals the mechanism behind cancers associated with a family of enzymes called APOBEC, which had been rather enigmatic until now. The original purpose of APOBEC enzymes, according to Lawrence, was probably to fight viruses. But recent studies from Getz’s lab and others have shown that many cancers are enriched for genetic mutations caused by these enzymes.

“Something that most cervical and bladder cancers, some breast cancers, many head and neck cancers, and a scattering of many other tumor types, all have in common is over-activity of APOBEC enzymes,” Lawrence said. People had been studying APOBEC cancers for years, trying to figure out what exactly was going wrong, but they had so far met with little success.

One thing that had interested Lawrence and Getz about APOBEC was that while it introduces dozens of mutations all across the genome, it always affects the cytosine bases — the “Cs” in the famous DNA alphabet which also contains As, Ts, and Gs. This was interesting because it played right into a hypothesis about asymmetry that Getz and Lawrence had already begun to explore.

“Every cell has two DNA strands that wrap around each other in a double helix. Both carry the same information, so each double helix has two copies of the information,” Lawrence said. “When damage happens to the DNA it might happen on just one strand.” Identifying the strand on which the damage originally occurred could give researchers clues about the mechanisms behind cancer mutations.

"But because the cell so carefully maintains the matching of the two strands, a misplaced base on one strand quickly leads to a complementary misplaced base on the other,” said Nicholas Haradhvala, co-first author on the paper together with Paz Polak, both associated scientists at Broad and members of Getz’s lab at MGH. “By the time DNA sequencing is performed, it is impossible to tell which strand originally was damaged."

In order to identify the strand originally damaged, Haradhvala and his colleagues looked at asymmetrical processes such as DNA transcription and replication. DNA transcription is the first step in gene expression, whereby the genetic blueprints contained in the gene are read and translated into proteins. DNA replication is the process by which DNA is copied when cells divide. In transcription, a variety of cellular apparatuses unzip the two DNA strands and then make a mirror image copy of one of them. The other strand hangs out like a vulnerable flag in the wind, waiting for the process to complete, potentially getting blown over with mutations in the meantime. The strand that is being read is further protected from mutation because the process includes a step in which another apparatus comes in with the specific job of repairing any damage it finds. The non-transcribed strand — that vulnerable flag — doesn’t benefit from such a perk.

After analyzing the mutational patterns of 590 tumors across 14 different cancer types, the team discovered that liver cancers seem to be riddled with mutations that stem from transcription-coupled damage. That is, mutations tend to pile up on the non-transcribed strand more frequently in liver tumors than expected. This is a novel phenomenon that is first described in this work.

In replication, both strands are copied simultaneously, but since the machinery that does so only works in one direction, copying the strand with the opposite orientation is a bit of a stilted process. The copying apparatus, a protein called a polymerase, takes a step forward, copies everything behind it, and then moves another step forward and copies backwards again. The other strand is just happily copied in a continuous, (literally) straightforward manner. And since the backwards strand is so often hanging out alone, it is more vulnerable to damage just like the non-transcribed strand described above.

So in both transcription and replication, cellular processes treat the two strands of DNA in an asymmetrical fashion. This asymmetry is what allowed Getz, Lawrence, and their colleagues to figure out the mechanism behind APOBEC cancers. It turns out, according to the team’s painstaking analysis of millions of data points, that the APOBEC enzyme most often introduces mutations to the lagging (or “backward”) strand during DNA replication.

Both the liver and APOBEC findings are big news. After all, it’s not every day that a new mechanism for generating mutations comes along. But more importantly, they also offer insight into how DNA transcription and replication work from the perspective of mutations — findings that could have implications in understanding even more cancer types in the future.
“It’s like having a computational microscope,” said Getz. “It allows us to see what’s going on inside the cell, where the action is happening while the DNA is being transcribed or replicated. That’s the beauty of this work.”

Going forward, Getz, Lawrence, and their colleagues have big plans for their asymmetry work. They are already in the process of collaborating with dozens of labs around the globe to collect and analyze whole genome sequences of 2,800 tumors. Part of that work will include asymmetry analyses like those described here, to try to understand whether these processes have mechanistic implications for other cancer types as well. In the meantime, they are also collaborating with their benchtop biologist colleagues to carry out functional studies as follow up to the computational work done for this study, trying to recreate in a live setting what they saw in that computational microscope.