From Barrett’s to cancer 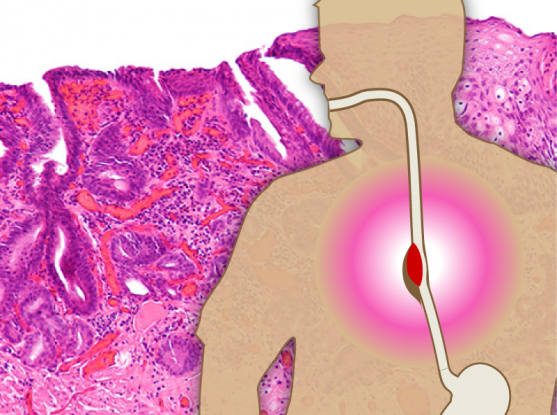 By Veronica Meade-Kelly
A new study by researchers from the Broad Institute of MIT and Harvard, Dana-Farber Cancer Institute, and Brigham and Women’s Hospital suggests that esophageal adenocarcinoma (EAC) progresses differently than previously suspected.

What: A new study by researchers from the Broad Institute of MIT and Harvard, Dana-Farber Cancer Institute, and Brigham and Women’s Hospital suggests that esophageal adenocarcinoma (EAC) progresses differently than previously suspected.

For the study, which appears online in Nature Genetics, researchers took samples from EAC patients that included cancer tissue as well as premalignant, surrounding tissue affected by Barrett’s esophagus – a complication of gastroesophageal reflux disease and known precursor to EAC. They then sequenced the exomes, or protein-coding regions of the genome, in cells from those samples. Using an algorithm known as ABSOLUTE, along with other computational methods, they were able to trace mutation patterns in the samples, revealing the lineage of cells and reconstructing the cancer’s evolutionary tree. The information helped them determine the key genetic events that occurred along the path from Barrett's to full-blown cancer.

Previously, the prevailing theory about EAC progression was that the cancer developed following a gradual accumulation of genetic mutations. However, the team found that, in over 60% of cases studied, EAC was instead catalyzed by a single genomic event – "whole genome doubling," during which the entire complement of chromosomes was duplicated. The researchers suspect that this whole genome doubling may be enabling a more rapid progression to cancer. In addition to identifying this potentially more direct route to cancer, the authors also found that a key mutation occurred earlier than previously believed: it had been thought that mutations to the tumor suppressor gene TP53 happened late in EAC progression, leading to dysplasia – an intermediary state between Barrett’s and cancer in which cells begin to exhibit abnormal changes in appearance. However, the new study found that TP53 is deactivated much earlier in the process, long before the tissue becomes dysplastic.

Why: Many patients have Barrett's, but only a small percentage of them go on to develop EAC and it is difficult to identify which Barrett's sufferers are most at risk. As a result, EAC is often identified late, when prognoses are poor. The identification of a mutation (as in TP53) that could be detected early, or a trigger event (such as whole genome doubling) that could be further investigated open new possibilities for diagnostics and prevention.

“We know that if you find cancer early when it’s localized, the cure rates are much better than when it has progressed,” explains co-senior author Adam Bass, a physician/scientist at Dana-Farber and Brigham and Women’s and associate member at the Broad Institute. “Overall, this study should change some ideas about how this cancer develops, and if we have a better sense of how these cancers emerge, we may be able to develop new screening approaches that might be more effective in addressing what’s really happening in patients.”

Who: Executing this genomic study of EAC required a perfect pipeline of team and technology. Pathologists such as co-first author Matthew Stachler, a postdoctoral fellow in Bass’ lab, were needed to collect samples and precisely identify and separate tissue from Barrett’s, cancer, and various intermediate disease stages. Those painstakingly-derived samples were then shepherded through the exome sequencing process by scientists from Broad Technology Labs, and finally analyzed by computational biologists led by co-senior authors Scott Carter, who created ABSOLUTE, and Gad Getz, who directs the Cancer Genome Computational Analysis group at the Broad as well as the Bioinformatics Program at the Massachusetts General Hospital Cancer Center and Department of Pathology.

Where to find it: Nature Genetics, online July 20.

Development in reverse: A better model of human induced pluripotency
New insights on an old virus