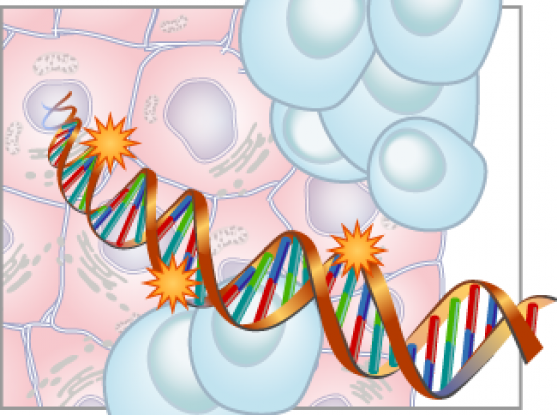 Immuno-editing cancer cells
By Paul Goldsmith
One of the great misconceptions about cancer is that, since tumors originate from normal cells, they are able to disguise themselves from the immune system—lurking undetected and unopposed as they divide and proliferate. In reality, the immune system is no passive observer when it comes to cancer...

One of the great misconceptions about cancer is that, since tumors originate from normal cells, they are able to disguise themselves from the immune system—lurking undetected and unopposed as they divide and proliferate. In reality, the immune system is no passive observer when it comes to cancer. Evidence is mounting that many tumors undergo almost constant immune attack. But just how these attacks are initiated and what their effect is on different tumor types has remained largely unexplored. Until now.

A team of researchers from the Broad Institute — including Mike Rooney, Sachet Shukla, Cathy Wu, Gad Getz, and Nir Hacohen — has tested a notion scientists have long suspected: that the immune system plays an active role in not only removing tumor cells, but also editing the cancer genome.

The Broad team analyzed different tumor types to see how the individual cancers initiated and reacted to immune activity. Results of the study, recently published in Cell, indicate the immune system plays a very active role in fighting cancer, and may even drive tumor adaptation and survival by selecting against specific sequences in the cancer genome.

“We started out wanting to understand what the evasion mutations might be,” said first author Mike Rooney. “But we were also able to learn about the genesis of immune response as well.”

The team began by identifying a group of 370 mutations that recurred across all 18 tumor types in the The Cancer Genome Atlas (TCGA).

“Because we saw the sequences across all 18 tumor types, we knew they weren’t random passenger mutations, and we started asking what fraction of this set was related to the immune response” said senior author and Broad Institute Member Nir Hacohen. By integrating multiple lines of evidence from TCGA datasets, the team narrowed the set down to 35 mutations.

“This is a segment of genes we believe are arising because of immune response, and might later help the tumor with immune evasion,” said Hacohen.

One of the first mutations to be identified was a protein known Beta-2 microglobulin (Beta-2m)—which plays a key role in the immune system recognizing malignant cells.

“If a tumor has a Beta-2m mutation, cells can’t present as well to the immune system,” says Hacohen. In addition to mutations, the team’s analysis also indicated that genetic amplifications were also associated with immune activity in tumor cells—suggesting that tumors may evolve several different methods of evasion.

The results of the study identified several promising candidates for drug development, and may impact ongoing immunotherapy efforts. One of the study’s most compelling outcomes is the suggestion that it may be possible to classify tumors based on how susceptible they are to immune attack, which could potentially pave the way for new methods of tumors analysis.

Since greater concentrations of immune-related mutations would seem to indicate greater levels of immune activity, researchers could “potentially use the results to see whether or not a tumor is worth targeting with the immune system,” said Hacohen, who along with Institute Member Catherine Wu oversees the Broad’s personalized cancer vaccine project. “Together with several other associations discovered in our study, we envision devising a metric that predicts if a tumor is already spontaneously immunogenic, if it may be sensitive to therapy, and which kind of immune therapy may be most useful against that tumor.”

Although the presence of these immune-related mutations does not directly infer they are the result of immune-attack (Hacohen and Rooney are in the early stages of a longitudinal study they hope will demonstrate that) they do demonstrate just how aggressively the immune system attacks cancer cells.

“What makes our study exciting is that it brings us closer to understanding what triggers our immune system to eliminate tumors in the first place, and in turn, how tumors resist these attacks,” said Hacohen. “The better we can understand these inducers and resistors of tumor immunity, the better we can design rational therapies.”