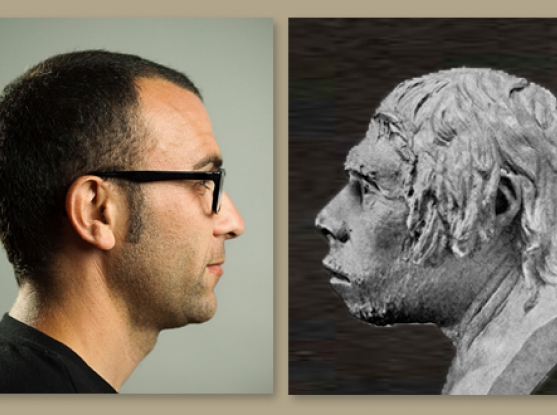 Ancestral legacy
By Veronica Meade-Kelly
It’s part of human nature: we look at ourselves in the mirror and see links to the past. “Those bright green eyes?” we think. “Those came from grandma.” “The cleft chin? That’s from dad’s side.” Our instinct, of course, is to attribute notable traits to close relatives – those that we know...

It’s part of human nature: we look at ourselves in the mirror and see links to the past. “Those bright green eyes?” we think. “Those came from grandma.” “The cleft chin? That’s from dad’s side.” Our instinct, of course, is to attribute notable traits to close relatives – those that we know personally or through family history. The reality, however, is that the genetics that influence our traits – or “phenotypes” – could date back generations. Some may have been introduced into human lineages more than 40,000 years ago.

The sequencing and analysis of the Neanderthal genome has shown that Neanderthals interbred with early modern humans between 40,000-80,000 years ago. It has also revealed that Neanderthal ancestry accounts for roughly 2 percent of the genome of people today of non-African descent. These findings raise a compelling question: to what extent is Neanderthal DNA still influencing the traits of modern humans? Is it affecting modern phenotypes, or is it simply an inconsequential relic of the ancient past? A paper published by Broad researchers this week in Nature takes a systematic approach to answering these questions.

Armed with a far more detailed picture of the Neanderthal genome than was previously available, a team led by Broad senior associate member David Reich compared the Neanderthal genome with genomes of over 1,000 present-day humans to determine where, exactly, traces of Neanderthal ancestry could be found in modern man. Their findings yielded intriguing insights about how this ancestral legacy may (and may not) be influencing contemporary human phenotypes.

One notable finding was that Neanderthal ancestry appeared disproportionately in areas of the genome that harbor genes that influence keratin filaments. Keratin is a key protein building block in human skin and hair.

“The keratin findings are interesting because it appears to show evidence of natural selection,” explained Reich, who is also a professor of genetics at Harvard Medical School and an investigator at the Howard Hughes Medical Institute. “It’s tempting to think that the infusion of these Neanderthal genes helped modern humans who were migrating out of Africa and into Western and Eastern Europe adapt to cold environments. The keratin genes were passed to modern humans and helped them adapt and survive.”

The researchers also found evidence that some genetic variants that can be traced back to Neanderthals may affect an individual’s risk for certain diseases.

“One of the things we did for this paper was identify alleles which we think are from Neanderthals; modern humans did not have these alleles before mixing with Neanderthals but now they do,” explained Sriram Sankararam, a postdoctoral fellow in Reich’s lab and the paper’s first author. Alleles are different versions, or variants, of a gene that are responsible for producing different phenotypes.

Sankararaman said the team compared the Neanderthal alleles that they identified with a list of alleles previously linked to modern human diseases through genome-wide association studies (GWAS). Their search turned up nine alleles that arose in Neanderthals and are medically relevant today, including genes associated with increased risk for type 2 diabetes, cirrhosis, Crohn’s disease, and lupus. (Reich’s lab was part of a larger Broad-led team that reported on the type 2 diabetes gene in a separate publication last month.)

Nick Patterson, a senior computational biologist at the Broad who worked on the study, said that these findings may be only the beginning.

“I predict that we will find a number of disease phenotypes (and perhaps other phenotypes as well) that are linked to Neanderthal genes in present-day populations,” he said. “Some were identified in this paper, but I suspect we will find more as we are able to look more specifically at risk alleles identified by ongoing genome-wide association studies.”

“The most interesting thing in the paper is that there are places in the genome that have been cleared of Neanderthal ancestry because it was not tolerated when it was introduced in modern humans. Those genes were what we call ‘deleterious,’ and were selected against,” Reich explained.

He said his team was able to track down a likely explanation for these deserts: hybrid male sterility. When species diverge from a common ancestor, as humans and Neanderthals are believed to have done, their genes continue to evolve but along separate lineages. When the species meet and interbreed again after a long period of time, if certain genes have diverged enough, they may no longer be compatible. This can lead to sterility – the inability to reproduce – which is known to affect males to a greater extent than females. Reich and his team found Neanderthal deserts in parts of the genome consistent with this phenomenon, suggesting that hybrid male sterility played a role in rapidly weeding out Neanderthal genes through natural selection in these “desert” areas.

The researchers said that access to the high-quality Neanderthal genome published last month enabled their research. The analysis of that genome, which was derived from a 50,000-year-old toe-bone, was led by Svante Pääbo of the Max Planck Institute for Evolutionary Anthropology in Germany, together with Reich and Montgomery Slatkin of the University of California, Berkeley.

The researchers anticipate that a more in-depth understanding of the genomes of other ancient peoples, such as the Denisovans, will lead to similar studies, further elucidating the connection between our ancient past and modern biology.