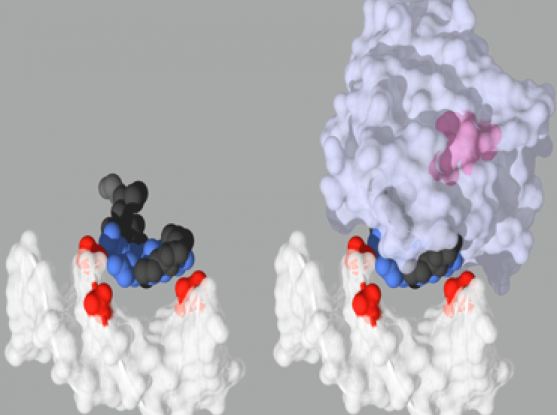 Authors’ predicted structures of a molecular sled
By Leah Eisenstadt
Protein interactions via a new type of biochemistry- one-dimensional biochemistry Broad core institute member Paul Blainey recalls that toward the end of his graduate training in Chemistry and Chemical Biology at Harvard nearly a decade ago, things became really interesting. He got a request for...

Broad core institute member Paul Blainey recalls that toward the end of his graduate training in Chemistry and Chemical Biology at Harvard nearly a decade ago, things became really interesting. He got a request for help from a scientist who studies viruses that would later lead to their discovery of a new vehicle for intracellular transport dubbed a “molecular sled” and help chart the path of Blainey’s own scientific career.

Blainey had been studying “facilitated diffusion,” a biophysical process by which certain proteins locate specific, rare sites on the genome at which they perform their function. “These proteins face a real needle in a haystack problem in finding these sites among the vast excess of irrelevant DNA sites,” he said. Suspecting that these proteins act as predicted theoretically by Dr. Peter von Hippel and Dr. J. Michael Schurr more than 30 years ago by binding at random locations on the genome and then moving along the DNA until they find their destination, Blainey showed that the proteins do in fact slide along the genome and that they follow the DNA helix by spinning along it in a corkscrew fashion.

Because of their expertise in methods for measuring DNA sliding, Blainey and his advisor, Sunney Xie, were contacted by Walter Mangel of the Biology Department at Brookhaven National Laboratory – an expert on adenovirus, a DNA-containing virus that infects humans – with a crazy idea. Mangel wondered if adenovirus enzymes might slide on DNA like the DNA-binding proteins studied by Blainey and Xie. This would solve an outstanding question in Mangel’s own research. The DNA in the adenovirus virion (viral DNA surrounded by a protein shell) is so tightly packed that enzymes and their substrate proteins must be bound to the viral genome. If so, how do these proteins interact with each other? Mangel hypothesized that in order for the enzymes to find and react with their substrates, the only choice they have is to slide along the DNA.

“The thing that was really wild about this notion was that the adenovirus proteins didn’t have much to do functionally with DNA,” said Blainey. The adenovirus protease (AVP) studied by Mangel is an enzyme that serves to chop up viral proteins to make a virion infectious, an activity totally unlike those of the proteins Blainey and Xie observed searching for specific sites on DNA, such as DNA repair enzymes or transcription factors, proteins that drive gene activity.

Through collaborative experiments using their unique areas of expertise, Blainey and Mangel discovered that AVP indeed slides along DNA and it slides much faster than anything else they had ever measured. This was a remarkable discovery, since no one had expected that a protein would use DNA as a transport system to find another protein.

The work broke with biophysics dogma in several ways: it showed that facilitated diffusion can drive protein-protein interactions, not just protein-DNA binding, and that new classes of enzymes and proteins not related to DNA metabolism can undergo facilitated diffusion. It also implied a new type of biochemistry, one-dimensional biochemistry, where proteins interact by sliding along the one-dimensional contour of DNA. Mangel said “In three-dimensional space, proteins are always colliding with each other. If on the rare occasion they collide with each other at the optimal angle and speed, they will bind to each other. Binding is required for biochemical reactions to take place. In one-dimensional biochemistry, proteins are bound to the sled in a certain orientation, and it is possible every collision on DNA, not just rate ones, will lead to binding.” Mangel and Blainey went on to show that AVP not only slides under laboratory conditions to cleave its substrates which are also bound nonspecifically to DNA it also slides in the virus particle, to cleave its substrates.

But something continued to puzzle Blainey and Mangel, even as Blainey completed his postdoctoral work at Stanford and joined the Broad as a core faculty member. What is the mechanism by which AVP slides on DNA? AVP seemed to slide along DNA only when activated by an attached viral peptide (a short segment of protein) from one of its substrates. Through a series of experiments described in a new paper just published in Nature Communications, Blainey, Mangel, and colleagues showed that, surprisingly, the small peptide is actually what mediates the sliding, and that it, by itself, can slide along DNA.

This was surprising because scientists in the field, including Blainey, had thought that proteins needed a rigid structure and DNA-binding interface to move rapidly along DNA, but the small, sliding peptide is a flexible string of just eleven amino-acids with no stable structure itself. “The fact that these flexible peptides could slide along DNA was just totally out of left field,” said Blainey. He wondered if only highly specialized viral peptides can slide, or whether this was a more generic capability shared by many proteins and peptides. Could the peptide help any protein slide along DNA? To answer this question, Blainey and Mangel attached streptavidin, a protein 100-times larger than the viral peptide and one that normally doesn’t bind DNA, onto the sliding adenoviral peptide and observed that the streptavidin-peptide complex not only bound to DNA, it indeed slid along DNA.

The researchers describe the peptide as a “molecular sled”: something small that can slide along DNA by itself, or carry different cargos (especially proteins) along DNA. Because the peptide has no structure that determines its function, Blainey and Mangel suspected that they might be able to predict sliding activity in other peptides and in proteins simply from analysis of the sequence of amino acids, rather than of their three-dimensional shapes. At the end of the major structural protein in a cell, actin, is a sequence similar to that in the sliding peptide and, when tested, the actin peptide slid along DNA.

The researchers also provide evidence that DNA sliding may be a common ability shared by many proteins that act within the cell nucleus. By studying the famous tumor suppressor, p53 (previously shown to slide on DNA by others), the team found a short sequence within the gene known as a “nuclear localization signal” (NLS) that closely resembled the adenoviral peptide and also was able to slide by itself along DNA. If nuclear localization sequences can serve as molecular sleds, Blainey and Mangel think it’s likely that many different human proteins could interact by sliding on DNA within the nucleus of every cell.

In the future, the Blainey team aims to find and explore the sliding activity of other NLS peptides and proteins and make synthetic molecules, in addition to engineering sliding activity onto proteins that don’t currently have it. With the ability to carry potentially diverse molecular cargos, the molecular sleds could one day add function to designer proteins and represent a new means of drug delivery, with the potential to target the nucleus more efficiently and avoid off-target toxicity.

“With these new results, we are invigorated to continue our work in this area of biophysics,” said Blainey. “We never imagined that these other classes of peptides and proteins could slide on DNA, and that prevented us from discovering them for so long. I think there are other interesting molecules with functionally important sliding activities out there yet to be found.”

In search of a telltale sign
Pardis Sabeti: How we'll fight the virus next time