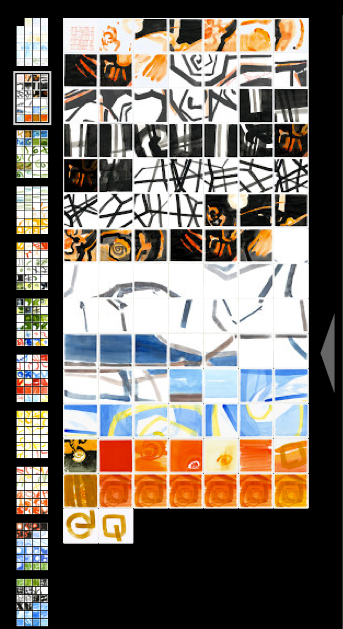 The walls at the Broad Institute are an interactive space, a convenient and ubiquitous medium for communication. Meeting agendas, cellular diagrams, code and equations, even cartoons – such scribblings are part of the workplace decor. The walls are another place in which Broadies share ideas.

Yet there are some walls that remain out of bounds to such doodling. Daniel Kohn, the Broad's founding artist-in-residence, maintains some of that real estate. His current installation, "Instance of a dataset," adorns the space opposite the elevators on each floor of the Broad building at 7 Cambridge Center. The space is ostensibly off-limits to the sort of interpersonal exchange that the walls of the Broad often facilitate. Kohn’s installation isn’t meant to be touched but, in keeping with the Broad spirit, he wants what is on those walls to be interactive.

"Instance of a dataset," a series of wire and watercolors on paper grid assemblies, is the product of years of conversation and interdisciplinary exchange between Kohn and the Broad community. Each assembly has its own color palette and design that in some way reflect work that is taking place at the Broad. However, just as scientific work is never static – each new discovery building upon and evolving from the work of others – Kohn wants the exhibit to be a launching point for new ideas. He would like to see his own evolving assemblies used by others to create new, surprising forms.

To enable that interactivity, Kohn conceived of Assembly Space, an app that allows anyone with computer access to manipulate his assemblies, creating unique designs to be saved and shared with others. Saved designs join Kohn’s own assemblies in the app’s design library, where other users can select them as the starting point for their own artistic inventions. Kohn’s intention is that users will interact with the art online, building and evolving assemblies in a social space.

"The idea I had coming into this was that, just like when you're working in a scientific environment, it's not a solitary pursuit. Ideas go into the space of collective thinking – they circulate, get published, and get shared,” Kohn said of the project.

The first spark for Assembly Space came about three years after Kohn first joined the Broad community. He had spent that time engaging scientists and absorbing ideas. Kohn has an interest in the space of data representation – how information is represented visually and how it moves between people, facilitating understanding. As he talked with Broad researchers and learned about the various ways that science is visually represented, he started painting designs inspired by their conversations. He painted them on square tiles, in part because the 8x8 inch squares were easy to scan to view and manipulate online.

When Kohn loaded the scanned tiles into Picasa, he discovered something pleasantly unexpected: the thumbnails formed grids that changed depending on the aperture of the screen. If the view was switched from 9 tiles across to 12 tiles, for instance, the appearance of the grid was altered, and so was the meaning of the array.

Kohn noticed something else that was serendipitous: "Totally by accident,” he said, “the grid system looked like a genetic sequencing system.”

Kohn found that this “strange similarity” extended beyond appearances. As he looked at and analyzed the different grid patterns his work was yielding, he saw a connection between his evolving artistic process and the experimental process scientists used when gathering data and sifting through it algorithmically to find patterns and meaning.

“I suddenly found myself in a metaphoric relationship to the work that was around me," he said.

Kohn liked the interplay that he was seeing between his art and Broad science – the way that both depended on the manipulation, organization, and interpretation of data. He was interested in how bits of information could be moved around, creating different juxtapositions that could alter the meaning of that work, and he started to think of ways that he could incorporate that concept into his art.

That idea ultimately led to Assembly Space, but Kohn had to wait for technology to catch up to his vision. Initial attempts to create the interactive experience that he envisioned fell a little short: they allowed users to play with Kohn’s assemblies, but the new assemblies that were created were static so users were unable to build upon each others’ work.

Last year, Kohn teamed with programmer Frank Rose, another father at his daughter’s school, to build Assembly Space. The app, which is now live, allows users not only to save designs, but to alter them. Users choose images from the image palette in the left-hand column and drag them into the workspace in the center of the screen. There, tiles can be moved, flipped or rotated. New assemblies can be saved to the public repository on the right of the screen, and clicking on a saved assembly will bring it into the workspace as well.

In the workspace, assemblies can be disassembled, reorganized, or augmented. They can even be layered, potentially lending a third dimension to the two-dimensional designs. This interactive element was exactly what Kohn had in mind.

“I don't want people to think of these assemblies only as images, they're working copies," he explained.

Kohn hopes that Assembly Space will take off as a communal space for ideas. He encourages people to visit the space, make their own assemblies and, most importantly, to publish their designs for others to see and use.

Asked what he most hopes to see on Assembly Space, Kohn said that he wants to be surprised. He would be pleased to see users make a game of creating assemblies online, and he would love to see a Broad spin put on the app – perhaps having computational biologists or imaging experts develop plug-ins that shift views or run analytics that track the genealogies of assemblies.

Kohn is looking forward to seeing what Assembly Space users come up with, and says that there is a possibility that ideas generated on the app could feed back on his exhibit at the Broad. Kohn revisits “Instance of a dataset” monthly to expand, transform, and reconfigure the piece. The work, which Kohn sees as a nine-month process of invention, was installed in October and will evolve through June, after which it will remain in its final form as a permanent exhibit.