Justin Chávez, a junior at the University of Maryland, Baltimore County majoring in bioinformatics and computational biology, investigated possible synthetic lethal gene interactions in breast cancer cells and built components for a bioreactor, known as “mutatostat,” that adjusts mutation rate to determine interactions relevant to an antibiotic resistance model.

Cancer and antibiotic resistance are two major health challenges in which evolutionary processes play a major role. Acquired mutations create variation upon which new mutations are dependent. It is possible for mutations to occur that confer a fitness advantage, but create a strong dependency on another gene’s function. If both of the genes become mutated, the cell may die or have a significantly reduced fitness; these combinations are referred to as synthetic lethal and synthetic sick partners, respectively.

To detect mutually exclusive mutations in antibiotic resistance, we wanted to analyze a diverse set of mutation trajectories leading to resistance. For that, we designed a device named “the mutatostat,” which grows bacteria while exposing the cells to a mutagen. We created an integrated optical density measurement device using the lab’s 3-D printer, a light sensor, and LED light source to measure bacterial growth rate. The whole apparatus was connected by an Arduino microcontroller that also allowed us to adjust mutagen and antibiotic dose. Dose is varied to maintain strong selection as the population adapts. In order to increase the diversity of possible mutations, we developed a novel technique to separate a population of bacteria based on fitness. This separation encourages diverse trajectories by reducing interstrain competition. Carboxyfluorescein succinimidyl ester (CFSE) stains lysine residues in cells and is halved in intensity concordantly with cell division. This allows us to segregate cell fitness through their growth rate. We optimized the concentrations of both CFSE and Ethylenediaminetetraacetic acid (EDTA) to have the most amount of stain per cell so that the divisions can be tracked for a longer amount of time. We found the optimal concentration to be 10mM of EDTA and 200uM of CFSE for Escherichia coli.

Once the mutatostat construction is complete and we are able to efficiently separate bacteria based on growth rate, we will be able to process bacteria through the system and sequence their genomes. This will allow us to observe many sets of possible paths towards antibiotic resistance. These results may be used in the future to design therapeutics that target the widest range of trajectories.

PROJECT: The identification of synthetic lethality in cancer and antibiotic resistance 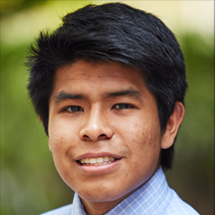 The SRPG program is full of people who want to see you succeed as a scientist and in your personal life. Having this support while being able to perform high-impact, interdisciplinary work at the Broad makes for a great summer of research and self-discovery.